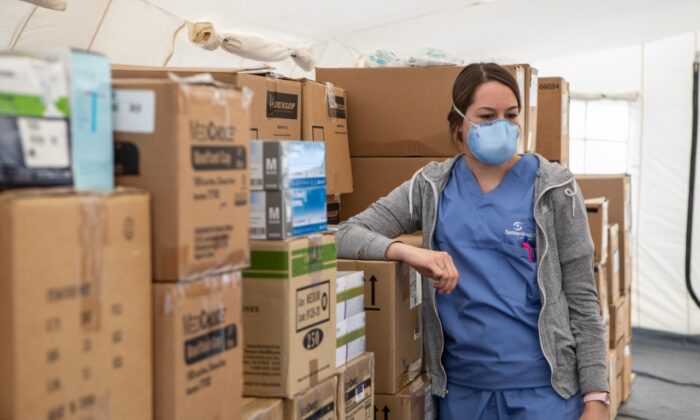 A nurse stands inside a tent with stocked medical supplies in a file photo. (Emanuele Cremaschi/Getty Images)
Constitutional Rights

Nurses who face termination from their jobs at an Illinois hospital have filed a lawsuit against the facility for allegedly refusing to grant them religious exemptions from the COVID-19 vaccine mandate, arguing that the move is illegal under state law.

Six nurses who work at Riverside Healthcare in Kankakee, Illinois, filed a lawsuit (pdf) in the Circuit Court for the Twenty-First Circuit in Kankakee County. The nurses, who are being represented by the Liberty Justice Center, said they were told by the facility they would be fired for refusing the vaccine and were denied religious exemptions, according to a news release.

“These nurses worked throughout the pandemic, putting their lives and their families’ lives on the line,” Daniel Suhr, managing attorney at the Liberty Justice Center, said in a news release, adding that Riverside is terminating their employment now “unless they violate their religious beliefs and their conscience” regarding vaccines.

Describing the hospital’s rule as “ruthless overreach,” Suhu said the plaintiff nurses know the CCP (Chinese Communist Party) virus, which causes COVID-19, “better than anyone and are making a deeply personal, individual choice that should be respected,” according to the release. “Not only is that the right thing to do, but it’s Illinois law.”

Specifically, the lawyers say that Riverside’s mandate violates the Illinois Health Care Right of Conscience Act, arguing that the law prohibits discrimination against a worker who won’t accept the administration of healthcare services. COVID-19 vaccines, the attorneys said, fall under this provision.

The Health Care Right of Conscience Act, their lawyers added, describes “conscience” as “a sincerely held set of moral convictions arising from belief in and relation to God, or which, though not so derived, arises from a place in the life of its possessor parallel to that filled by God among adherents to religious faiths.”

One of the plaintiffs, nurse practitioner Neelie Panozzo, issued a statement via the Justice Center, explaining that her profession allows her to “live out” her faith “by serving my patients.”

“I believe I am called to love and serve my patients, especially those who are frail and vulnerable. I am also following my faith’s teachings when I say I cannot accept this vaccine,” her statement said. “I am ashamed that Riverside will not respect my sincere beliefs and instead insists on firing all of its employees who sought conscience protections.”

The Epoch Times has contacted Riverside Healthcare for comment on the lawsuit.

Previously, Riverside Healthcare told an unvaccinated employee in September that regarding religious exemption requests, the organization takes them “very seriously and respect the time you invested to submit it.” However, the letter from Riverside said the organization cannot risk having unvaccinated staff caring for patients, according to the Daily Journal.

“Based on our review of your declination request and our COVID Vaccination Program Policy, your request has been denied. Although your religious or strongly held belief may otherwise qualify for an exemption, Riverside has decided to deny your request because you are in a patient-facing position,” the healthcare system said in the letter.

The lawsuit comes as the office of Illinois Governor J.B. Pritzker, a Democrat, said it wants to bar individuals from citing the Health Care Right of Conscience Act for religious-based vaccine exemptions.

“The Health Care Right of Conscience Act was never intended to allow people to avoid public health guidance during a global pandemic. The administration supports efforts to clarify the law, so it cannot be misinterpreted by fringe elements,” his office said this week.