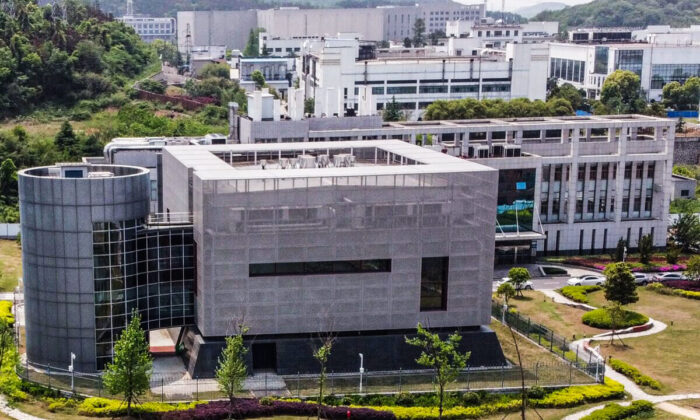 The P4 laboratory, designated as the highest level of biological safety, at the Wuhan Institute of Virology in Wuhan, China, on April 17, 2020. (AFP via Getty Images/Hector Retamal)
Editor's Picks

The nonprofit that funneled United States grant money to a high-level laboratory in China committed a slew of violations, the National Institutes of Health (NIH) revealed this week.

EcoHealth Alliance was non-compliant with eight different portions of a written agreement it entered into with the U.S. government, NIH informed the group in a letter sent last week that was made public recently by Republicans on the House Oversight Committee.

EcoHealth failed to allow access to the Wuhan lab’s records and financial statements, report inventions created at the lab, or certify that the requirements imposed by it on the lab to make sure the funds were used in accordance with U.S. laws and regulations, among other failures, said Dr. Michael Lauer, an NIH deputy director.

“EcoHealth has demonstrated a history of failure to comply with several elements of the terms and conditions of grant awards not only for these active awards, but also for the suspended award, R0AI110964,” Lauer informed Drs. Aleksei Chmura and Peter Daszak, EcoHealth’s chief of staff and president.

NIH had previously suspended a single grant to EcoHealth but allowed the agency to continue to receive funds through other awards despite its links to the Wuhan lab, which is located near where the first COVID-19 cases were first identified in late 2019.

U.S. intelligence officials have obtained evidence that the virus that causes COVID-19 may have come from the lab, but other officials have argued it has a natural origin.

COVID-19 is the disease caused by the CCP (Chinese Communist Party) virus. The CCP has refused to cooperate with many investigators attempting to probe the virus’ origins throughout the COVID-19 pandemic.

Republicans on the House Oversight Committee said the new letter “confirms EcoHealth hid the truth about their risky coronavirus experiments in Wuhan.”

In October of last year, Republicans successfully obtained information from the NIH that showed, according to many experts, that the U.S.-funded experiments at the lab included gain-of-function research on modified bat coronaviruses.

Scientists there used a modified virus strain that ended up making mice sicker when compared to mice infected with the original strain, Lawrence Tabak, now the NIH’s director, previously told lawmakers in a letter.

Jack Nunberg, a virologist and director of the Montana Biotechnology Center at the University of Montana, told The Epoch Times in an email that the experiments were “overly risky” and Jonathan Latham, executive director of The Bioscience Research Project, said the experiments “clearly constituted gain-of-function.”

Tabak requested lab notebook entries and other files related to the experiments which EcoHealth had withheld, but the new letter shows EcoHealth has still not provided that information, Richard Ebright, a professor of chemical biology at Rutgers University, wrote on Twitter.

“Incredibly, EcoHealth has racked up even more violations of grant terms and conditions,” he said.