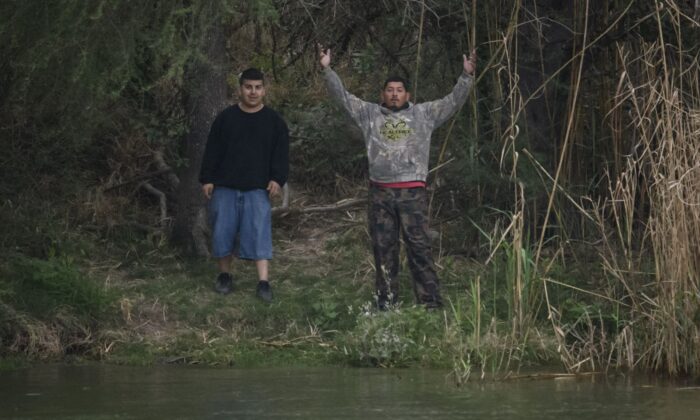 'Coyote' people smugglers gesture as they stand on the Mexico side of the Rio Grande river near the US the border city of Roma on March 28, 2021. (Ed Jones/AFP via Getty Images)
Immigration & Border Security

Apparent Mexican drug cartel members threatened Republican senators from across the Rio Grande in Texas when they visited the border as Border Patrol officials grapple with a surge in illegal immigrants and human smuggling, according to one of the senators.

“We went right there at midnight [on Friday] to the Rio Grande River, and we were really taunted by Mexican cartel members,” Sen. Steve Daines (R-Mt.) told Breitbart. “They didn’t know it was Republican senators who were staying there—literally on the water’s edge in the brush—but they knew it was probably Border Patrol. They could hear the English voices.”

A Border Patrol agent who could translate Spanish to English told the senators that the cartel members made “vile” and “threatening” statements to them.

“It was obscene, because they know they can have their way. They’re not afraid. They know they can make thousands of dollars per person that’s crossing right now. That’s what’s going on, right now,” they said.

When asked about what the cartel members said, Daines said, “I can’t repeat it on the air.”

“Our Border Patrol guys were saying that they were telling us to stick certain—it related to anatomy and other things. Let me just say that. It was absolutely vile, and it was horrible, and, ‘You can’t stop us,’ and so forth. They had these great big flashlights they shot back at us,” he said. “This is what’s at stake. It’s lawlessness. They don’t care.”

The senator was joined by about a dozen other Republican lawmakers at the border over the past weekend. In statements and videos posted online, the senators said President Joe Biden’s move to rescind several Trump-era immigration rules triggered the surge in human smuggling, child smuggling, and people crossing the border illegally, which has then put extensive pressure on Border Patrol agents to find facilities to house unaccompanied children and others for processing.

Last week, Biden and White House officials decried Trump’s policies as inhumane and described the surge in illegal immigration as routine ahead of the summer months.

But Daines described inhumane conditions when he went to a facility in Donna, Texas, used to house illegal immigrants.

The facility, he said, is “like a massive tent city they created for this flood of illegals … By the way, when the illegals come across now, they put signs up and arrows on the ground that direct illegals where to go. They’re not running away from the Border Patrol. They want to be apprehended because of Joe Biden’s policies.”

Daines called on Biden to preserve some of the previous administration’s immigration rules, namely the “Remain in Mexico” policy.