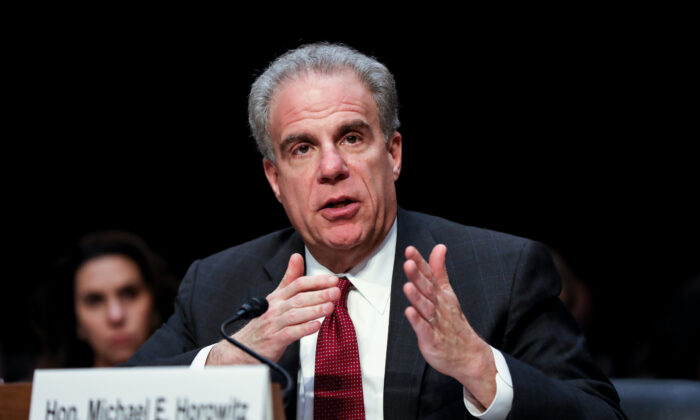 The most recent audit of the agency’s Woods Procedures—rules that the FBI follows to ensure that FISA applications are “scrupulously accurate”—found sweeping “non-compliance” that “raises serious questions about the adequacy and execution of the supervisory review process in place at the time of the applications we reviewed,” Horowitz said, stating that the FBI’s quality-control officials apparently missed these problems.

His office also identified 183 FISA applications that had a missing or incomplete Woods file, which is a document meant to ensure the accuracy of statements made to the secretive FISA court. The report also found hundreds of other cases where there were instances of noncompliance with the agency’s Woods procedures.

“A failure to adhere to the Woods Procedures … could easily lead to errors that do impact probable cause—and therefore potentially call into question the legal basis for the government’s use of highly intrusive FISA warrants,” Horowitz wrote.

Horowitz recommended that the FBI attempt to make “additional efforts to communicate and emphasize to its workforce the importance” of the bureau’s own standards when applying for FISA warrants.

In a statement released after Horowitz’s report, the FBI told media outlets on Sept. 30 that it appreciated the IG’s “determined focus on the FBI’s FISA process, especially given the significant changes and policy enhancements that we have worked to make in concert with, and in many instances, prior to the issuance of this most recent OIG Audit Report.”

The federal law enforcement bureau will accept Horowitz’s recommendations detailed in the report and has adopted about half of them already, according to the statement. FBI officials didn’t immediately respond to a request for comment.

The audit report is an extension of a report that was issued by Horowitz in March 2020, when he reviewed 29 FISA applications. According to that report, the inspector general couldn’t review four of the applications because the FBI wasn’t able to locate them. Of the 25 he could review, all of them had flaws—209 errors in total, Horowitz said.

“Our testing of FISA applications … identified apparent errors or inadequately supported facts in all of the 25 applications we reviewed, and interviews to date with available agents or supervisors in field offices generally have confirmed the issues we identified,” he said in his March report.

Horowitz lamented in the Sept. 30 audit that the FBI hasn’t taken his earlier report seriously.

“In response to the findings in our December 2019 FISA report and March 2020 [report], the FBI Director publicly acknowledged the seriousness of the identified problems and announced numerous steps the FBI was undertaking to address them,” he said.

The IG report was likely referencing statements FBI Director Christopher Wray made to Congress in February, when he told representatives that they shouldn’t “lose any sleep” over the December 2019 IG report.

“The vast majority of the FISAs we do, both the initial applications and the renewals, are the kinds of applications that I am quite confident—we don’t know each other, but you wouldn’t lose any sleep over, and we wouldn’t want to grind to a halt,” Wray told Rep. Jim Jordan (R-Ohio) at the time.

Following the release of the latest report, Jordan took to Twitter to blast Wray for downplaying earlier concerns.

“It was worse than we ever thought.”

The FBI’s failure to adhere to surveillance rules has led to criminal charges in some instances.

After Horowitz’s findings were released in 2019, special counsel John Durham later filed charges against former FBI Attorney Kevin Clinesmith for falsifying a document used in a FISA application to surveil Page. He pleaded guilty in August 2020.

In August, Durham’s office indicted Michael Sussmann, a lawyer who represented the Democratic National Committee, for allegedly lying to the FBI when he spoke to a top bureau official, James Baker, in 2016. On Sept. 17, Sussmann pleaded not guilty to the charge.

According to the indictment, Sussmann had passed along a claim alleging that there was a secret communications channel between a Russian bank and the Trump Organization. Durham alleged that Sussmann told Baker that he wasn’t representing a specific client, but was actually secretly representing Democrats, Clinton’s campaign, and an unnamed technology company executive.