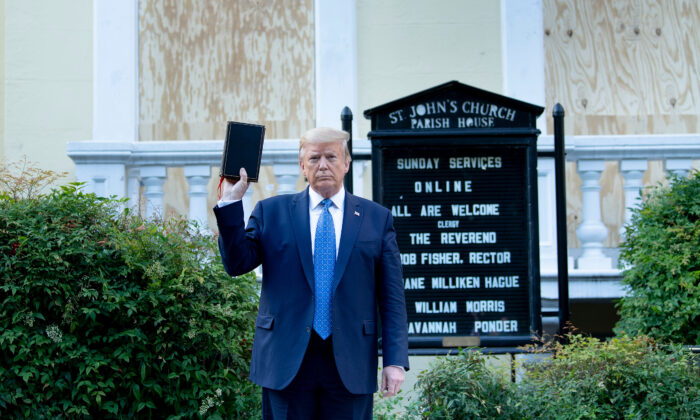 Then-President Donald Trump holds a Bible while visiting St. John's Church across from the White House, which had been damaged by riots, in Washington on June 1, 2020. (Brendan Smialowski/AFP via Getty Images)
Viewpoints

In Deep Crisis, US Will Nonetheless Recover

It is now clear that as the avalanche of “wokeness” and national self-hate has crashed over the restraining walls of the American mythos, one pillar of traditional American democracy after another has fallen.

The whole process was so sudden and has come on so unexpectedly that it is still difficult to appreciate the gravity of the assault on the American conception of itself that foresaw, accompanied, and celebrated the unprecedented rise of this country, in two long lifetimes after the end of the American Revolution in 1783 to a position of unprecedented preeminence in the world, with half the world GDP and a nuclear monopoly in 1945.

The 2016 election revealed that the American middle and working classes felt that the country was being misgoverned and unjustly milked by a new class of get-rich-quick young people, favored by the preferments of exemplars in the Clinton and Obama administrations.

Real middle-class income hadn’t appreciated since the late 20th century and the media had failed to highlight the accumulated catastrophes of post-Reagan administrations: endless fruitless war in the Middle East that raised the influence of Iran, the greatest financial crisis in the world in 80 years, a huge humanitarian refugee disaster, up to 20 million unskilled illegal immigrants taking the jobs of the American working class while American businesses decamped to cheap labor countries and exported unemployment back into America while retaining their foreign profits abroad.

It was all ultimately perceived, more or less accurately, as the hollowing out of America for the benefit of Wall Street, Hollywood, Big Sport, Big Media, the universities, and China.

When Donald Trump tapped into this in the presidential election of 2016, the first institutions to buckle were the senior echelons of the intelligence community and the Justice Department.

Their illegal use of domestic intelligence surveillance on the basis of false warrants that the applicants knew to be supported only by false allegations collected on behalf of the opposing presidential campaign, and various other serious irregularities, have been under an inexcusably slow special counsel investigation for two years.

The system is so compromised that after all this, it’s hard to be optimistic that anything useful will happen, but it’s possible that those agencies have been seriously chastened and that their error will not be repeated for a long time. There may still be some prosecutions.

It soon became evident that the bipartisan political class was so shaken by Trump’s victory that they were prepared to go to any lengths short of a military coup d’état or assassination to get rid of him.

The next institutional casualty of this political civil war was the integrity, such as it had ever existed, of the special counsel system. In the absence of a shred of evidence of wrongdoing by the president, a relentless harassment and media character assault ensued. This was followed by the most spurious impeachment process that has afflicted any president in the country‘s history, prior to the even more preposterous second impeachment of Trump in January and February.

The House of Representatives intelligence and justice committees have been revealed as rabidly partisan, probably frequently guilty of illegal conduct, and morally bankrupt. It would be impetuous to claim that there is no precedent for serious disrespect of Congress. But what is occurring is the creation of an unprecedented level of disbelief in the integrity of Congress: 85 percent of Americans disapprove of it.

An even larger percentage of Americans despise the national political media and don’t believe a word that they read or hear in the media. This is unhealthy in a democracy, as it leads to an indifference about whether there is any value to free media at all.

Almost all of the leading commentators and many prominent print editors and writers have unctuously asserted that objectivity is obsolete and fraudulent, and that the distinction between reporting and comment is a useless bourgeois relic. They are proud to engage in advocacy journalism, the more brazen gleefully confess a level of dishonesty that up to 15 years ago would have denied them employment in all but the most sensational media outlets.

Without Trump-hate to fall back on, the survival of even the severely ethicality compromised national political media that now exist will require some parting of the ways with the Biden administration as the gravity of its dishonesty and incompetence become harder to disguise.

The first cracks were CBS’s insinuation last week that the coronavirus was germ warfare from China, and The Washington Post debunking President Joe Biden’s outrageous description of the Georgia electoral reforms law as “Jim Crow.”

He has signed on to the bunk about “systemic racism” and claimed the Jan. 6 invasion of the Capitol was by white supremacists and was tolerated by white supremacist Capitol Police. Eventually, these lies will catch up with him and the media will have to notice.

Apart from this gradual media regeneration, the fragmentation of traditional franchises and the public scramble for competing outlooks will gradually force the political media back into a modicum of professional integrity, though it will be an excruciatingly long and painful process.

The collapse of the traditional American business executive has been especially sobering. The self-serving platitudes of the chambers of commerce are often tiresome, but the aggregation of rights of censorship by the social media cartel leaders is a nauseating spectacle of self-adoration and hypocrisy.

There was a shared ambition for reform between the Trump right and the Sanders–Warren left, but the extreme pro-Democratic partisanship of the social media barons has probably seduced Sanders and Warren, and it will be more long and complicated legislative trench warfare settling these Frankenstein monsters down.

They gained so much money and power so quickly, they think it’s easy and don’t identify with traditional American business or believe in classical capitalism. All good things grow on trees.

More contemptible but easier to deal with are the asinine posturings of Jamie Dimon (JPMorgan Chase) and Ed Bastians (Delta Airlines), who didn’t bother to read the Georgia electoral reform but attacked it from cowardice at the threat of a boycott (Bastian), and from Dimon’s long-familiar truckling to the Democratic establishment. They will not be able to defend their positions and will be no more brave facing the Trump world’s counter-boycotts.

Nothing can be done about Hollywood, and its vulgarity, vapidity, and pretentiousness: an infestation of not overly intelligent people who are talented thespians full of ridiculous opinions. In general, they are self-defeatingly self-important.

Big sport is even less formidable. Their fans tend to be conservative and they are extremely vulnerable to changes in the stadium arrangements they enjoy. The hypocrisy of basketball, especially, in China will be sadistically rubbed in their faces with exemplary effect. These actors and athletes are so greedy and most of their careers are so transitory, mitigating the impact of their destructive nonsense should be relatively simple.

The greatest problems of traditional pillars of American democracy that will require the longest time to deal with are rotten education from kindergarten to postgraduate school and the seeding of critical race theory in the armed forces. The teachers unions will ultimately have to be decertified and broken up; competition and the steady pressure of red-state government will accomplish this over a long time, and the tax treatment of university endowments, as well as healthy competition along the length of the education ladder, will gradually accomplish this, but not come easily nor without a great deal more recourse to blackmail from the teachers.

We saw from the insubordination of the secretary of defense and the chairman of the joint chiefs over the walk to the presidents’ church, which was almost torched by “peaceful protesters” in the summer, what has happened to the armed forces. There isn’t much to be done until there is a change of administration and a new commander-in-chief pulls the inflammatory curriculum and takes a scythe through the upper ranks of the Pentagon.

It will happen, but in the meantime, there are legitimate concerns both about the motivations of many of the forces and the strategic competence of many of the senior officers. America is in crisis, but it has been in crisis before and it does resolve them.