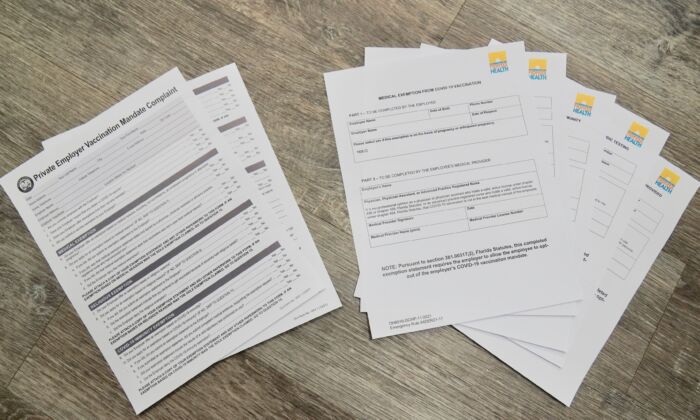 Florida's Attorney General Ashley Moody has added simple forms to her website that can be used to gain exemptions from employer vaccine mandates or to report employers who ignore a new Florida law protecting workers who want to avoid getting the jab,
US News

Florida’s Attorney General Ashley Moody unveiled online tools on Dec. 3 that workers can use to easily report violations of a new law requiring employers to accept exemptions to vaccine mandates.

The new online documents clearly explain the rules, and the process, for employees wanting to opt-out of getting COVID-19 vaccines, and describe the way violations will be handled. COVID-19 is the illness caused by the Chinese Communist Party (CCP) virus.

By clearly defining the process, and providing links to easy-to-complete forms, Moody has not only given the new law “teeth, but it also provides some legit tools for uninjected employees facing discriminatory working conditions,” said Jeff Childers, a Central Florida attorney.

Already, complaints about employers are rolling in, said Lauren Cassedy, a spokeswoman for Moody.

Since early 2020, Childers has been representing individuals, and large groups, fighting mask and vaccine mandates.

He rallied the 40,000 readers of his daily coffeeandcovid.com blog to pressure elected officials with a phone-call campaign asking for a special session to create that law, and others related to COVID-19.

Florida’s Gov. Ron DeSantis eventually called for the special session Childers and his readers had wanted and, four days later, state lawmakers delivered four bills—including one to protect the jobs of workers opposed to getting the COVID-19 vaccine.

Another gave parents the right to decide whether their children should, or should not, wear masks at school.

DeSantis signed the bills into law at a ceremony last month in Brandon, Florida. The laws took effect immediately. And Childers’ readers promptly sent in $60,000 in donations to the DeSantis reelection campaign as a show of their thanks. The donations could be attributed to the group effort because each individual donation was at least $12 and ended with a two.

Guidelines posted over the weekend give employees and independent contractors of employers requiring COVID-19 vaccinations access to exemption forms to meet their individual needs, as defined by a new state emergency rule.

The guidelines list allowable reasons for exemptions, and explains how an employee can file a complaint against an employer after being fired for not getting a vaccine.

Private companies employing fewer than 100 people can face a fine of up to $10,000 per violation.

Fines for larger companies are up to $50,000 per violation.

Public employers, including educational or governmental institutions, are now prohibited from imposing vaccination mandates in Florida, as well.

Violations for public employers can be reported to the Florida Department of Health through VaxPassFreeFL@FLHealth.gov.

The state considers an employee “fired” even if the person quits after the employer makes working conditions difficult, or intolerable.

For quickest processing, employees can file a complaint online. Complaints may also be submitted to vaxmandate@myfloridalegal.com, or by mail to the Department of Legal Affairs, Private Employer Vaccine Mandate Program. By Tuesday morning, complaints about out-of-compliance employers already were rolling in, said Lauren Cassedy, a spokesoman for the Attorney General’s office.

Childers is working on a way to provide low-cost help, possibly with group video chats, to people nervous about filling out the forms.

He provided free and paid legal advice that way when employees had to draft their own requests to opt-out of work vaccine mandates earlier in the pandemic.

But the new state-provided forms are easy to understand, he says, and “don’t ask for any confidential information.” That’s important because of privacy concerns, he said.

The new process will work this way: after receiving a complaint, the Florida Dept. of Legal Affairs (DLA) will alert the employer, who has 20 days to submit a written response.

After evaluating both sides, if it looks like the employer violated the new exemption law, the DLA will file a lawsuit against the employer in the state’s Division of Administrative Hearings (DOAH).

Employees who file complaints will be kept up-to-date by the DLA.

Workers with complaints about employers have described a wide variety of concerns to Childers:

One told him about a new office policy that will require the unvaccinated to wear a mask and face shield or goggles within six feet of others. Because desks are closer than six feet from each other, that will be an all-day, every day necessity. Unvaccinated workers aren’t allowed to eat or drink near anyone else, so that means breaks with food or drink or lunch at a workspace won’t be allowed. The unvaccinated also aren’t allowed to eat in the workplace cafeteria. Lunch with coworkers is prohibited.

Another unvaccinated client reported facing a surcharge of $100 per month to have employer-provided medical benefits, and $125 more per month for adding a spouse, Childers said,

Another client works for a Florida county. The county’s policy requires any unvaccinated employee exposed to COVID-19 at work to use personal sick time for a mandatory 14-day quarantine, even if experiencing no symptoms. Vaccinated employees will be allowed to quarantine using “administrative leave with pay.”

Another client lamented, “Our HR department shredded the [Florida Health Department exemption] form that I hand-delivered.”

Another complained, “Our hospital is requiring employers who get the exemption to wear masks, get tested twice a week at our expense, eat separately, and wear something on our work badge that designates that we are non-vaccinated.”

Clearly, these employers are in violation of the state’s new rule, Childers said. And now there’s a clear punishment for employers who ignore it.

“One of the best things about the rule is that it says that overbearing policies against uninjected workers is the same thing as termination,” Childers wrote in his blog.

“It defines the ‘functional equivalent of termination’ as when ‘the employer, through its actions, made working conditions so difficult, or intolerable, that a reasonable person in the employee’s position would feel compelled to resign.’”

Employees who’ve refused the vaccine and face unpleasant consequences should notify their employer that “if the odious policies aren’t changed, the employee plans to quit and file a complaint with the DLA.”

Childers says, “That’s a threat with some teeth to it, and employers will have to seriously think about how much they really want to punish employees for not getting jabbed versus risking heavy fines.”

Conservative activists had worried that the forms would be intrusive, possibly collecting private information about religious beliefs, or medical information, for a state database, Childers said. “Those worries were misplaced.”

The ease of gaining exemption from vaccine mandates is “a spectacular win for individual liberty, bodily autonomy, and privacy, and is also completely consistent with the Florida Constitution’s full-on protection of personal privacy interests,” Childers says.

“It should never have been more complicated than this.”