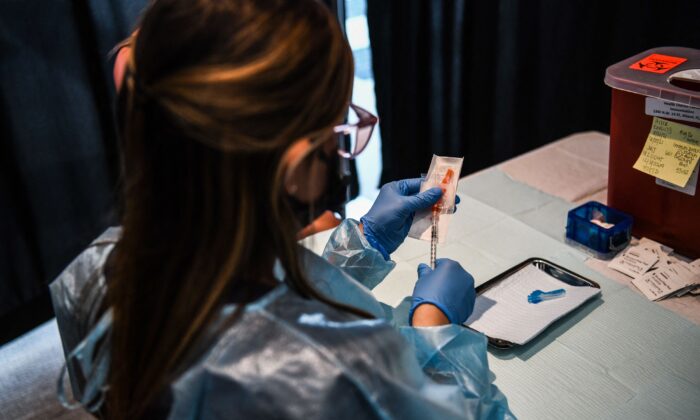 A health care worker prepares a COVID-19 vaccine in Florida in a file photograph. (Chandan Khanna/AFP via Getty Images)
Florida

A judge in Florida on Wednesday blocked a city’s COVID-19 mandate from taking effect.

Circuit Judge Monica Brasington, a Sen. Rick Scott appointee, granted a request for an emergency injunction. That means the mandate, which was slated to take effect on Oct. 1, is blocked for now.

“The city did not put on any evidence, at all, at the injunction hearing,” Brasington wrote in a 7-page ruling.

Gainesville’s City Commission on Aug. 5 decided all city employees needed to get vaccinated against the virus that causes COVID-19. A week later, City Manager Lee Feldman ordered employees to get at least one dose by Oct. 1 and be fully vaccinated by Oct. 14.

More than 200 Gainesville employees sued, noting that the effectiveness of COVID-19 vaccines in stopping transmission of the CCP (Chinese Communist Party) virus has stopped. They also said that the mandate did not make sense because many of them have natural immunity, or protection from having had COVID-19, and because area hospitals were not experiencing a shortage of beds.

In a recent hearing, the employees argued that the mandate violated their right to privacy under the Florida Constitution.

That means defendants have to show that the law “furthers a compelling state interest in the least restrictive way,” Judge Brasington said.

But the city submitted no evidence, called no witnesses, and did not file any affidavits or declarations, leading the judge to rule in favor of the plaintiffs.

“The city had an opportunity to present evidence that would show that this Vaccine Mandate was the least restrictive means to meet a compelling government interest. The city did not do that and, in fact, did not present any evidence, at all. Therefore, the court is required to find that the city failed to meet its burden of proving that the vaccine mandate furthers a compelling state interest in the least restrictive way,” she ruled.

The city is prohibited from enforcing the mandate and firing or disciplining any employee who fails to comply with it.

“The court agreed that the city doesn’t own its employees’ bodies,” Jeff Childers, an attorney for the plaintiffs, told The Epoch Times.

Jon Cicio, one of the plaintiffs, said he was relieved.

“It feels like a huge weight has been lifted off my shoulders. I can get back to focusing on serving the citizens the way they deserve, with no distraction,” he told The Epoch Times.

Florida Attorney General Ashley Moody, a Republican who filed an amicus brief in support of the plaintiffs, also celebrated the ruling.

“I was proud to stand with police and first responders to stop the city of Gainesville from firing them based on an unlawful government vaccine mandate. Today, the court agreed and protected their jobs. This is great news,” she wrote on Twitter.