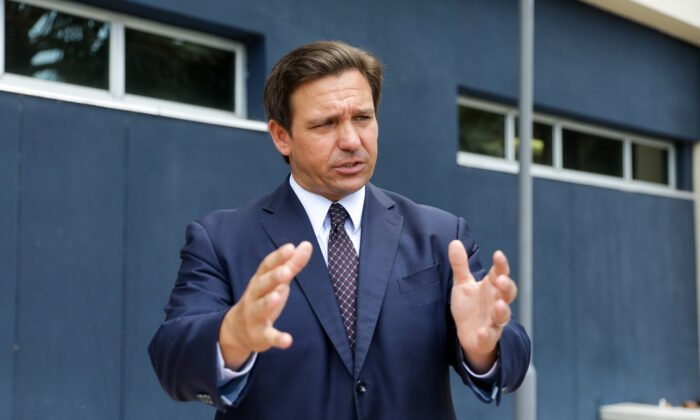 On Sept. 15, a Miami federal judge handed Florida Gov. Ron DeSantis a victory when he ruled against the parents of students with disabilities in a lawsuit over public school mask mandates.

Twelve parents from eight Florida school districts whose children have special needs sued the governor and the Florida Department of Education (FDOE) over a DeSantis executive order (pdf) that allows parents to opt out of student face coverings. The eight school boards, Alachua, Broward, Hillsborough, Orange, Palm Beach, Pasco, Miami-Dade, and Volusia, were also named in the suit for implementing the governor’s order. The federal suit argued that their children were at elevated risk of becoming ill or dying from COVID-19 if other children came to school without facial coverings.

In Judge K. Michael Moore’s decision, he denied the parents’ request for a preliminary injunction against July’s executive order, which was the catalyst for the Florida Department of Health to issue a rule (pdf) requiring school districts to allow parents to opt out of any student mask mandates. Thus far, 13 school districts have defied the governor’s order. Two counties, Broward and Alachua, have been fined for noncompliance, while others are under investigation by FDOE.

Moore found that the parents hadn’t exhausted all “remedies” at their respective schools to accommodate their children’s needs before bringing a lawsuit.

One of the attorneys for the parents, Matthew Dietz, said he isn’t sure if an appeal will be filed and hoped that the Biden administration would step in and bring forth some sort of remedy instead.

“We are disappointed in the decision of the court and are evaluating our options at this point,” Dietz said in an emailed statement. “We would hope and expect federal education officials and the U.S. Department of Justice will weigh in on the rights of children with disabilities to be safely integrated into their local schools.”

Recently, the U.S. Department of Education announced a grant program that provides funding for school districts in Florida (and elsewhere) that lose money for issuing “anti-coronavirus practices,” such as mask mandates. State officials were warned by the federal agency that they would be investigating whether the state’s ban on mask mandates violates federal civil rights laws that protect students with disabilities.

In the past, DeSantis has insisted that the new Parents Bill of Rights law gives parents the authority to decide whether their children should wear face coverings to school.

The offices of the governor and the FDOE didn’t respond to requests for comment by press time.