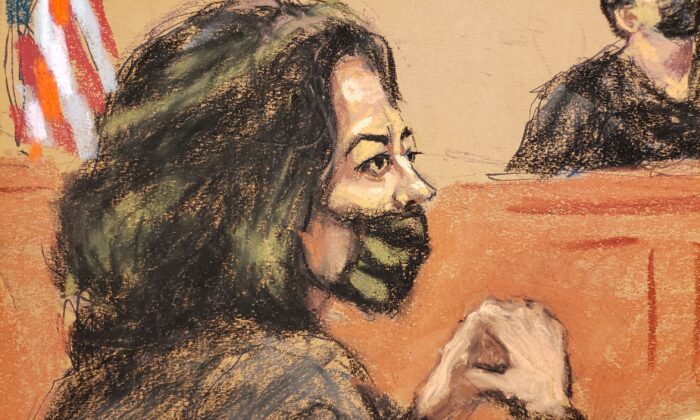 Jeffrey Epstein associate Ghislaine Maxwell sits during jury selection in her trial in a courtroom sketch in New York on Nov. 17, 2021. (Jane Rosenberg/Reuters)
Crime and Incidents

Information about women who said they were abused by late sex offender Jeffrey Epstein was handed over on Nov. 24 to prosecutors and defense attorneys associated with the case of close Epstein associate Ghislaine Maxwell, who has been accused of helping to recruit and groom the women when they were underage.

The information had voluntarily been given to the administrators of a victims’ compensation fund. A total of 225 alleged victims submitted information and collectively received nearly $125 million.

Prosecutors fought against forcing the fund administrators to hand over details, arguing that information about women who submitted claims wasn’t relevant or admissible in Maxwell’s upcoming trial. Maxwell’s lawyers argued the opposite.

U.S. District Judge Alison Nathan, an Obama appointee presiding over the high-profile case, decided this week to order the administrators to send the information to both parties. Nathan said she would review the materials first and decide whether to hold some of them back.

The information was sent to the judge on Nov. 24, and she opted to let the parties inspect all of it. It was pegged to be between 6,000 and 7,000 pages of documents by a law firm representing Jordana Feldman, the primary administrator of the fund.

In a separate order, Nathan said the materials “are likely to contain information that would (i) affect the privacy and confidentiality of individuals, (ii) would risk prejudicial pretrial publicity if publicly disseminated, and (iii) are not authorized to be disclosed to the public or disclosed beyond that which is necessary for the trial in this action.”

The former designation means that the materials can’t be disclosed to anyone outside of the parties except for legal workers, experts, or potential experts or consultants. The latter designation pertains to nude, partially nude, or otherwise sexualized material, which must be introduced under seal if it’s filed at all in the case.

The charges filed against Maxwell include enticing a minor to travel to engage in criminal sexual activity and transporting a minor with the same intent. Her trial is scheduled to start on Nov. 29. Only people inside the courthouse will be able to watch it, per federal rules. Alleged victims, members of Maxwell’s family, and members of the press are being guaranteed access to the trial.

Maxwell, who has pleaded not guilty in the case, has been held since her arrest in summer 2020 due to her wealth and connections around the world. She is facing up to 50 years in prison if convicted on all charges.