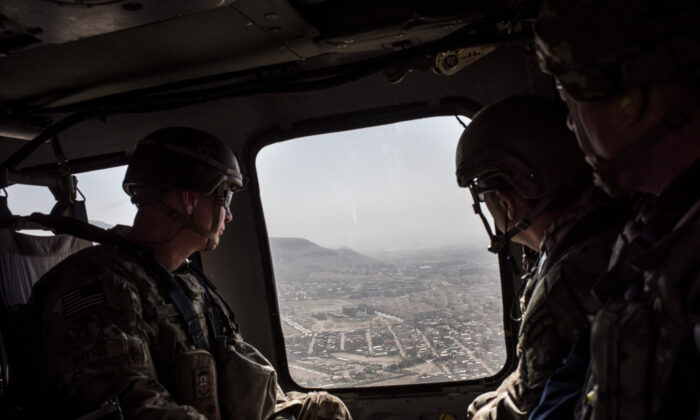 American service members deployed for Mission Resolute Support ride in a helicopter over Kabul on the way to Bagram Air Field in Kabul, Afghanistan, on Sept. 5, 2017. (Andrew Renneisen/Getty Images)
Viewpoints

Cui Bono? Who Benefits From the Afghanistan Withdrawal?

How does a leader decide what to do?

The most logical response is: “Cui bono?”—”Who benefits?”—from the decision.

If some policy benefits your country most, you should, within moral bounds, pursue it.

If your enemies benefit most, you should avoid it.

I’d be curious to learn what answer proponents of America leaving Afghanistan—conservative or liberal—would give to the question, “Cui bono?”

I can say that until this moment, I have not read or heard a single cogent argument from proponents of American withdrawal as to how exactly it benefits America.

“Twenty years is too long,” or its variant, “we have to end these endless wars,” the most commonly offered argument for withdrawal, has nothing to do with benefiting America.

It is an emotional sentiment, not a rational argument.

The withdrawal has already cost us in a single day more service members’ lives than we lost on any one day in Afghanistan since June 2014, seven years ago.

The number of American servicemen killed in Afghanistan per year from 2015 to 2020 is respectively 22, 9, 14, 14, 21, and 11. No one can seriously argue that we are leaving Afghanistan because of high American casualties.

So, while America doesn’t benefit at all from leaving Afghanistan, it does get hurt.

The damage to the reputation of America—as an ally and as a strong country—is not easily overstated.

The damage done to NATO, whose members President Joe Biden didn’t bother to consult, is greater than any damage former President Donald Trump—whom the left-wing mainstream media constantly attacked for damaging NATO—was alleged to have done.

On the other hand, “Cui bono?” has some very clear answers: China, Russia, Iran, North Korea, every Islamic terror group in the world and every other anti-American regime and movement.

In the Daily Wire, Ben Shapiro compiled a list of recent Western weakness in the face of tyrants and the commensurate strengthening of those tyrants:

“The West’s abandonment of Hong Kong in the face of Chinese aggression last year.

“The West’s continuing desire for a rapprochement with the Iranian mullahcracy.

“The West’s routine appeasement of Russia.

“All speak to the unwillingness of the West—and the West’s leader, the United States—to stand up for allies anywhere on earth.

“Afghanistan is simply the latest, and by far the most stunning, example of abandonment of an American ally …

“China’s Global Times, a Communist Party mouthpiece, chortled, ‘From what happened in Afghanistan, those in Taiwan should perceive that once a war breaks out in the Straits, the island’s defense will collapse in hours and U.S. military won’t come to help. As a result (Taiwan) will quickly surrender.’

“Indeed, given the window presented by the Biden administration, it would be somewhat of a surprise if China didn’t attempt some sort of action against Taiwan in the next few years …

“Foreign policy abhors vacuums, and the United States has now created one. That means that erstwhile American allies will begin to play footsie with countries like Russia and China, believing that American commitments mean little. They have reason for such suspicions, obviously.”

It seems that every generation has to relearn the basic laws of life, such as this one: There are many bad people and many bad countries in the world, and only a fear of good countries prevents them from conquering other countries.

There is less fear of good countries in the world today than at any time since World War II. And that is especially so because the good countries are preoccupied with their own alleged evils rather than with the world’s real evils.