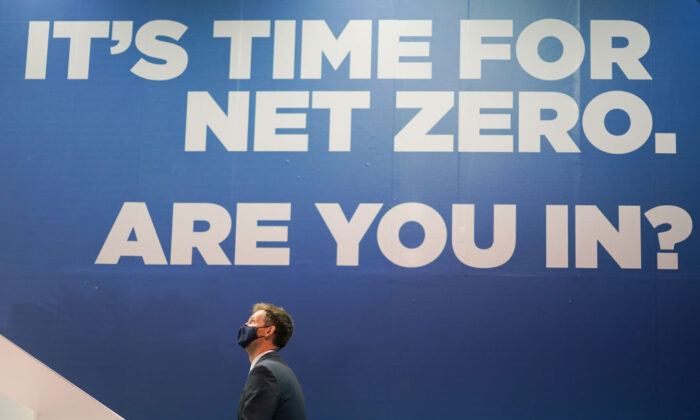 Coming to Terms With the Labyrinthine World of Climate Change

As the Glasgow Conference of Parties (COP26)—countries that signed the United Nations Framework Convention on Climate Change (UNFCCC) in 1994—fades into history, it is timely to assess the success, or lack of it, of this intergovernmental summit.

Delegates at the Glasgow summit reviewed the progress made by 196 countries that embraced the legally binding and enforceable Paris Agreement, a multilateral agreement adopted in 2015 that entered into force on Nov. 4, 2016. The Paris Agreement claimed to limit global warming to 1.5 degrees Celsius compared to pre-industrial levels—a rather ambitious aspiration.

The member countries of UNFCCC are expected to produce “Nationally Determined Contributions” (NDCs) that indicate their proposals to reduce the amount of carbon dioxide, CO2, in the atmosphere—yet there is no empirical proof that this drives the temperature.

In this context, the Australian Prime Minister, Scott Morrison, committed his government to the achievement of net-zero emissions by 2050.

By then, the coal, fossil fuel, and gas industries would have been decimated, electric cars would have taken over the Australian highways, and the high priests of climate change would govern the world.

But a governmental commitment to net-zero emissions by 2050 does not satisfy the powerful climate change lobby.

This lobby agitates in favour of a significant reduction of greenhouse emissions by 2030, which, according to present government predictions, would be around 25 to 28 percent below 2005 levels.

There is no doubt that people are responsible for local environmental degradation. We only must visit our cities to see the debris, the plastic containers and cartons, some factory chimneys that poison the air we inhale, the deforestation, and the degradation of the environment.

Even in fashionable suburbs, people have illegally removed trees from their properties if they threaten the integrity of a house or block a view. Also, in some parts of the world, notably Brazil and Indonesia, there is an excessive amount of deforestation, fuelled by tree burning, to create agricultural land.

While environmental degradation is a serious concern, it does not lead to the conclusion that, therefore, climate change is entirely man-made and that it is already too late to save the planet.

It is useful to remind readers of the cyclical nature of climate change: warming and cooling cycles have always followed each other in history. For example, the Medieval Warm Period, which occurred in the 11th and 12th centuries, recorded temperatures in the North Atlantic region, not unlike those experienced today. At present, Antarctica experiences a cold period.

He refers to a report published by the respected Mauna Loa Observatory (pdf), located in Hawaii. This observatory has concluded that “There is no statistical evidence for the claim by the U.N. IPCC (Intergovernmental Panel on Climate Change) that a rise in CO2 concentration causes a rise in the temperature of the lower troposphere, but there is highly significant evidence that the temperature determines the rate of change of CO2 concentration.”

The report further states confidently that “an important factor in the Earth’s climate change arises from the continually changing position of the moon and the planets relative to the Earth and the sun, and has nothing whatsoever to do with the concentration of CO2 in the atmosphere as this is a consequence of the climate change.”

But McRobert points out that carbon dioxide, together with methane, are insignificant greenhouse gases. Indeed, carbon dioxide only accounts for 0.04 percent of all the gases in the atmosphere.

The principal greenhouse gas is water vapour, namely those clouds that stop the sun from reaching our solar panels.

McRobert concludes that “Humans, animals, and plants simply recycle the gases of life, and to pretend we can regulate the climate by holding our collective breaths is fantasy land.”

Although there have been annual climate change conferences since 1994, the parties have achieved little progress in their commitment to reducing the level of carbon dioxide in the atmosphere. This is because major economic powers, such as the People’s Republic of China, India, and Russia, fail to participate enthusiastically in these conferences.

It is no wonder that, in the labyrinthine world of climate change, individual businesses have taken over the baton from governments to achieve the goals of the climate change gurus.

Indeed, businesses have now taken over the mantle of achieving measurable results, replacing governments in the pursuit of carbon neutrality.

Specifically, 217 businesses have now joined The Climate Pledge to achieve net-zero emissions by 2040. These businesses have agreed to (i) regular reporting, (ii) carbon elimination, and (iii) credible offsets.

They seek to implement “decarbonization strategies in line with the Paris Agreement through business change and innovations, including efficiency improvements, renewable energy, materials reductions, and other carbon emission elimination strategies.”

The involvement of companies is a significant development because it indicates that businesses do not trust governments to achieve their goals and, therefore, privatisation of the fight against carbon dioxide has occurred.

Of course, the problem with this approach is that anthropogenic interference with the atmosphere is not as convincing as the climate change gurus would like us to believe.