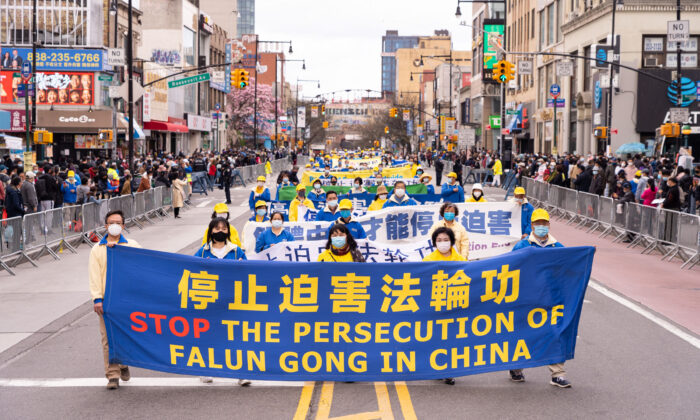 NEW YORK—The “extreme and unthinkable” suffering that the Chinese regime has inflicted on members of the faith group Falun Gong typifies Beijing’s totalitarian tactics, which, if left unstopped, could eventually come to the free world, cautioned human rights advocates on April 18.

“The Chinese Communist Party thrives on the ignorance and apathy of people around the world,” said Alan Adler, chair of the New York-based Friends of Falun Gong. “While our backs are turned and our eyes closed, they take advantage of our weakness and do their evils unchecked.”

Making the remarks at an in-person Falun Gong rally in New York City’s Flushing on Sunday, Adler urged the audience to take the “antidote to ignorance” by exposing the “cancerous danger” of the regime. Standing up for the persecuted faith group, he said, “equates to standing up for our own personal freedoms.”

To stay in power, the communist regime decides to target one group every decade, labeling them “public enemy,” Adler said. Even during the pandemic, the Party has not relented its persecution of innocents, using lockdowns to perpetuate harassment of believers while collecting personal information of Falun Gong practitioners who have sought refuge overseas, he noted.

“If these immigrants are not free from the CCP’s grasp, what does that say about the average American citizen?” Adler said.

Prior to the rally, around 1,000 of the city’s Falun Gong adherents and supporters marched through the streets in their first parade since the onset of the pandemic last year, according to the event organizers.

They are celebrating “truthfulness, compassion, and tolerance”—the three core tenets of the meditative spiritual discipline that has been heavily persecuted in China since 1999, and to commemorate a historic appeal’s upcoming 22nd anniversary next week, the participants said.

On April 25, 1999, around 10,000 Falun Gong adherents gathered peacefully at the Chinese Communist Party’s (CCP) headquarters of Zhongnanhai, hoping that authorities could restore their environment to freely practice their faith and release dozens of fellow practitioners arrested days earlier.

Despite senior CCP officials initially granting the petitioners’ requests, the regime soon launched an all-out campaign targeting the faith, subjecting the estimated 70-100 million adherents to arrests, slave labor, organ harvesting, and various other torture methods designed to sever them from their faith.

Chen Fayuan, a 16-year-old Erhu player studying in New York state, said her parents who live in central China were studying Falun Gong’s main teaching called “Zhuan Falun” at a friend’s place late at night in October, when more than 20 police officers, mostly in plainclothes, suddenly broke in and arrested them.

Police have also harassed her grandparents and tried to find her whereabouts, she said at the event.

Tears rolled down her cheeks as she spoke.

“My parents did not commit any crimes, but they are suffering the persecution for following truthfulness, compassion, and tolerance, I think this is extremely ridiculous,” she said in a speech.

Chen said that if she wasn’t already overseas, she probably would have also been arrested alongside her parents. “They wouldn’t even let off a teenage kid like me.”

Having not heard from her family for nearly half a year, Chen said she has been struggling with loneliness and anxiety, and crying herself to sleep at night.

“I don’t know if they have been tortured,” she said.

Yulia Nova, who handed out Falun Gong souvenirs and pamphlets along the parade route, said she “felt it in [her] heart what these people must be going through” when she first learned about the practice.

Before moving to the United States 22 years ago, Nova grew up in the former Soviet Union where all her male family members were communist military officers. Despite being in a family that was in the upper echelon of society, many literature they read were “passed under the table” because they were deemed illegal, she said.

“This is the state of mind where you know with your skin almost how evil the communist party is,” Nova told The Epoch Times. “It can get you anywhere, doesn’t matter [if] you are a little kid or you are a grownup,” she said.

It took her about 10 years “just to realize how brainwashed society there [was],” which also motivated her to support Falun Gong and shed light on the persecution.

“To be truthful also takes bravery,” she said. “In spite of all the division … we have to unite instead, because that would bring us hope to overcome whatever it is [that’s] coming our way as a humanity overall.”

Martha Flores-Vasquez, New York State Assembly 40th district leader, said at the rally that she was in tears watching the parade.

Her best friend lost her husband because he was a Falun Gong practitioner, she said, adding that the persecution that continues has reached “beyond the point of return” and “needs to end.”

“In April of last year I lost my father, I know what it is to lose somebody,” she told NTD, an affiliate of The Epoch Times.