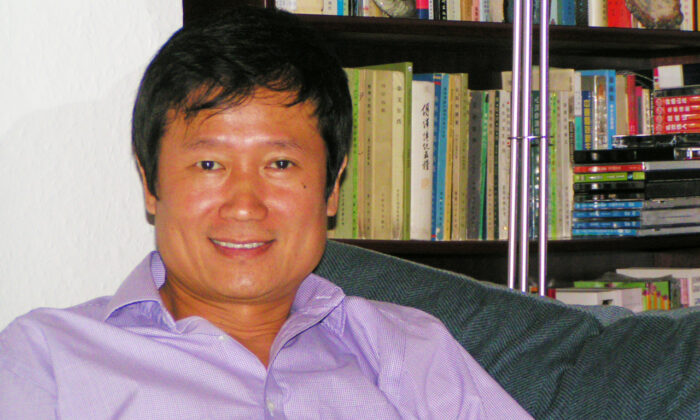 The Epoch Times is one of the main targets of the Chinese Communist Party (CCP) in Hong Kong because it makes the CCP afraid, a Chinese novelist has said.

Pu Zhang, writer, and novelist from Chengdu, China, is the Chinese translator of the award-winning autobiography “Wild Swans: Three Daughters of China,” and the younger brother of its author Jung Chang.

Speaking to The Epoch Times on April 18, Zhang said he felt both indignation and pride when hearing the sabotage of the Hong Kong Epoch Times printing press on April 12.

In the early hours of April 12, four masked intruders broke into The Epoch Times’s printing plant in Hong Kong. They tossed construction debris and smashed equipment before fleeing in a white van. The Hong Kong edition of The Epoch times had to suspend its distribution until April 16.

This is the fifth time the printing press has been sabotaged since it was set up in 2006.

Guo Jun, director of The Epoch Times Hong Kong edition, said that during the last 20 years, staff working at the publication have been followed, some of their family members in mainland China had been threatened, and their advertising clients, business partners, and landlords had been pressured.

“The attack [on Hong Kong Epoch Times] was inevitable, and will get worse in the future,” Zhang said, attributing his prediction to the CCP’s increasingly vicious actions as it works to tighten its grip on Hong Kong.

“Since day one, when the CCP took power [in China], the single most important thing has been control,” Zhang said, adding that it needs to control the media as well as people’s minds and speech.

“The existence of The Epoch Times is increasingly threatening to the CCP,” he said.

The Epoch Times and Jimmy Lai’s Apple Daily are “definitely the main targets that they [the CCP] will suppress, attack, and eliminate. But on the other hand, I’m proud of The Epoch Times,” Zhang said.

“The Epoch Times is an incredible media outlet. As its impact grows in Hong Kong and around the globe, the CCP is terrified,” he said. “So when I saw the news, apart from indignation, I’m proud of The Epoch Times.”

“If you look at the media outlets in Hong Kong, [they] have fallen,” he said.

Apart from the CCP’s own publications, other media outlets in Hong Kong “have been bought out by the CCP’s money. [They would] get a so-called ‘red-hat businessman’ to buy the whole newspaper with a lump sum,” he said.

“Basically, only two papers are left that are speaking the truth and fighting evil with righteousness,” he added.

Pro-Beijing media and government officials in Hong Kong have set their sights on efforts to shut down the Apple Daily, as its founder was sentenced on April 16 to 14 months in prison for participating in Hong Kong’s mass anti-Beijing and pro-democracy protests in 2019.

‘Everyone Is Worried About Hong Kong’

Zhang has attended a number of Hong Kong pro-democracy rallies in the United Kingdom. He said that everyone is worried about Hong Kong.

Zhang said that from his own experience, he has witnessed freedom in Hong Kong diminishing.

“My books, even just a fiction, when it was being sold in Hong Kong, the store would suddenly shut down,” he said.

“The CCP is afraid of even a love story. They are in control of big stores, which aren’t allowed to sell [my books], and small stores would be forced to shut down (after selling them).”

Zhang said that it was primarily people from mainland China who would buy his books and bring them back home.

Hong Kong has been a beacon of hope for the people in mainland China, Zhang said.

“Chinese people from the mainland saw hope there, [they] saw a land of freedom. Now this land, this freedom is diminishing. The CCP is once again putting chains around people,” he said. “Wouldn’t any normal person be angered and frustrated?”

“One Country, Two Systems is no more,” he said, adding that police in Hong Kong were being granted more control after the national security law was imposed.

“Everyone is terrified. When I call my friend on the phone, [the friend] would get nervous after a few words and hang up.”

Zhang said he is doing what he can to support freedom in Hong Kong from the UK, such as writing articles and attending rallies. He said, “I feel that I’m not letting myself down and that it gives my life some meaning.”

Beyond Hong Kong, Zhang said the CCP’s tentacles also run deep. He told The Epoch Times that he has witnessed the CCP’s stifling influence even in the UK.

One of Zhang’s novels, “A Tibetan Girl Called Ata,” tells a heart-wrenching love story between a Han Chinese and a Tibetan girl, set against the backdrop of the 2008 Tibetan unrest.

The novel’s English translation is set to be published soon but Zhang said it took him a while to find a publisher willing to take it on.

Several English publishers who found his book interesting wouldn’t publish it because they were afraid of upsetting the CCP, he told The Epoch Times.

“The CCP has a lot more control in the UK than in the United States because it controls all sorts of Chinese groups. Their informants are everywhere,” he said.

Zhang said that the advertisement clients of The Epoch Times Chinese edition in the UK have also been pressured.

“If you have a restaurant and advertised on The Epoch Times, you’d immediately be intimidated and punished by the CCP,” Zhang said. “It [the CCP] rallies people to boycott the restaurant … not every Chinese is afraid of its intimidation and control.”

Dr. Guihua Li, general manager of Epoch Media UK, confirmed that Epoch Times’s clients would often drop out, and some had confirmed that they were being intimidated.

Eva Fu and Alex Wu contributed to this report.