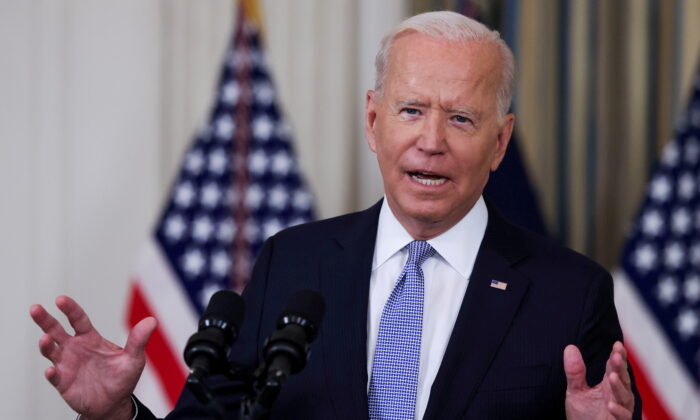 “Today’s report shows an increase over last month. Inflation hurts Americans pocketbooks [sic], and reversing this trend is a top priority for me,” Biden said in a statement on Nov. 10. “The largest share of the increase in prices in this report is due to rising energy costs.”

The president said he directed his top economic aides to attempt to “further reduce these costs,” regarding energy prices. He also asked the Federal Trade Commission to deal with “market manipulation or price gouging in this sector.”

High inflation is eroding wage gains, adding to the political risk facing Biden, whose approval rating has been falling, according to a number of recent polls, as Americans grow more anxious about the economy. Broadening inflationary pressures could also complicate the Federal Reserve’s communication, with top officials saying it’s “expected to be transitory” in recent public comments.

The Federal Reserve and White House have maintained that inflation will abate as supply chain bottlenecks are fixed. For example, the Marine Exchange, which monitors container ships coming from Asia, reported on Nov. 9 that 111 such ships are now sitting outside the ports of Los Angeles and Long Beach.

Later in his statement, Biden urged Congress to approve his “Build Back Better” agenda, coming after the House approved a Senate-passed $1.2 trillion infrastructure bill last week. A larger, $1.75 trillion social spending package is being debated in Congress.

However, a key senator, Sen. Joe Manchin (D-W.Va.), signaled on Twitter that he’s loath to pass the larger bill anytime soon. Manchin has said he fears the package would add to the national debt.

“By all accounts, the threat posed by record inflation to the American people is not ‘transitory’ and is instead getting worse,” Manchin wrote. “From the grocery store to the gas pump, Americans know the inflation tax is real and DC can no longer ignore the economic pain Americans feel every day.”

The Congressional Budget Office on Nov. 9 released a statement saying lawmakers will have to wait longer for a full score on the social spending bill.

The consumer price index jumped 0.9 percent last month after climbing 0.4 percent in September, the Labor Department said. The largest gain in four months hoisted the annual increase in the CPI to 6.2 percent. That was the biggest year-on-year rise since November 1990 and followed a 5.4 percent advance in September.