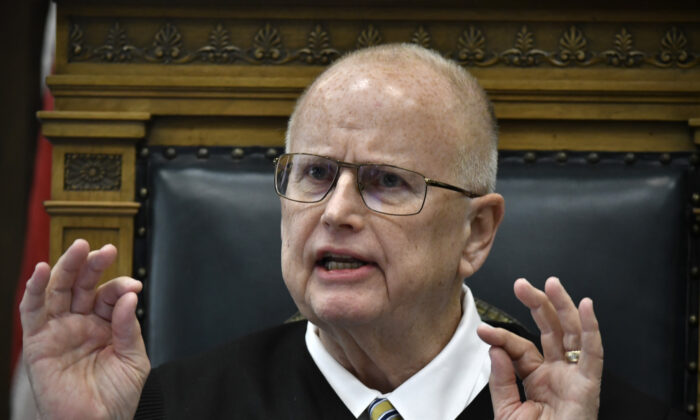 The judge presiding over Kyle Rittenhouse’s murder trial twice on Wednesday admonished the top prosecutor in the case.

Schroeder first ordered the jury out of the room at the courthouse in Kenosha, Wisconsin, when Binger commented on how Rittenhouse had been silent since the shootings took place in August 2020.

“He’s commenting on my client’s right to remain silent,” Mark Richards, Rittenhouse’s lead attorney, said after the jury filed out.

“The problem is this is a grave constitutional violation for you to talk about the defendant’s silence. You’re right on the borderline—and you may be over—but it better stop,” the judge told Binger.

About 20 minutes later, Schroeder again ordered the jury to leave.

“I was astonished when you began your examination by commenting on the defendant’s post-arrest silence,” Schroeder admonished Binger, visibly upset. “That’s basic law. It’s been basic law in this country for 40 or 50 years … I don’t know what you’re up to.”

Binger had brought up a piece of evidence that the judge ruled before the trial could not be referenced. The prosecutor was trying to tie the evidence, a video showing Rittenhouse saying he wished he had a gun with him so he could start shooting at alleged shoplifters, to the shootings that happened about two weeks later in Kenosha.

Binger apologized and said he may have misunderstood the judge’s ruling. He felt the testimony that unfolded on Wednesday enabled him to bring up the video in front of the jury.

The situation on Aug. 10, 2020, is “identical to what is going on the night of Aug. 25 in the sense that the defendant was using this exact same weapon, he was using it in a manner to try and protect property,” Binger claimed.

“No, he wasn’t,” the judge quickly rejoined.

Rittenhouse has said he would not shoot people to protect property but he fired upon three men because they attacked him, including Joseph Rosenbaum, who a medical expert testified had his hand over the barrel of Rittenhouse’s gun when he was shot.

“There’s a lot of difference between commenting about something when you haven’t got a gun and threatening someone when you do,” the judge added later.

“Don’t get brazen with me,” he told the prosecutor at one point.

Schroeder ultimately rejected Binger’s attempt to bring up the video and the jury filed back in.

Rittenhouse took the stand for the first time on Wednesday.

His defense team later said they would enter a motion for a mistrial with prejudice, which would prevent a retrial if granted.

Prosecutors twice in one day “commented on Mr. Rittenhouse’s right to remain silent,” Corey Chirafisi, one of the defendant’s attorneys, said.