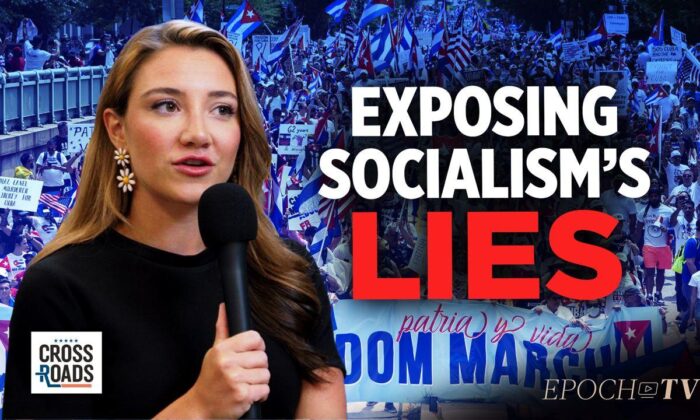 Young Americans must learn from history and recognize the “manipulative and distorted” narratives that justify socialism, says Morgan Zegers, founder of Young Americans Against Socialism.

Zegers said she believes the country is seeing the “early stages” of socialism, and that Americans must “connect the dots of the same promises” that were promised to the Cubans “in the early ages,” before people lived under the rule of the Castro dictatorship.

“We’re seeing those early rumblings of a rise of a leftist regime is what I would say, there’s a checklist in history of what really happens in a country that totalitarianism that rises, the authoritarianism and of course, the economic step, which is socialism,” Zegers told EpochTV’s “Crossroads.”

Promises made in Cuba when Fidel Castro, Che Guevara, and the rest of the Castro regime were rising to power are being mirrored today in the United States said Zegers, who runs Young Americans Against Socialism—a nonpartisan nonprofit dedicated to exposing socialism’s failures by creating viral educational videos for social media.

The rising Castro regime normalized the concept of forced wealth redistribution by stealing animals from wealthier farmers giving them to the working class in the town, promising more if they supported their movement, Zegers explained.

“In America, today, we’re hearing those same promises, but we hear it with things like the student loan crisis. They say, just give me power, and I’m going to take from those evil rich people that have way too much money and give it to you because that’s what’s fair and moral and right. All you have to do is vote for me,” she said.

These promises, Zegers said, have also normalized the concept of forced wealth redistribution amongst the younger generation.

“We don’t have those red flags going off in our head when we hear those promises. And I think that’s leading to what we’re facing now with 70 percent of young Americans being willing to vote for a socialist,” she said.

Zegers said the narrative that socialism will “work” in the United States is “very manipulative and distorted.”

“We say socialism has been tried two dozen times, and we’re still hearing people want to try it again. What we need to really connect the dots for young Americans’ minds is why it doesn’t work.”

Her remarks come in the wake of recent anti-communist protests in Cuba. In July, thousands of Cubans took to the streets in several cities and shouted “Diaz-Canel step down,” referring to dictator and Communist Party chief Miguel Diaz-Canel. They demanded greater freedoms and an end to the regime.

“Protests in #Cuba aren’t simply about ‘shortages,’” Sen. Marco Rubio (R-Fla.) said on Twitter at the time. “Socialism promises guaranteed food, medicine & income if you give up your freedom. When, as always, it fails to deliver you don’t get your freedom back. That’s why the protestors are chanting ‘Libertad.’”

Last year Cuba’s economy contracted 10.9 percent, and 2 percent through June this year, leading to shortages that forced Cubans to queue for hours for essential items throughout the COVID-19 pandemic.

“The best thing we can do is make sure the very basic information of history is understood. If we don’t learn from it, we’ll repeat it,” Zegers added. “And we’re seeing that in America today, so I hope people can understand we need red flags to go off in our head before we keep falling for it anymore.”

Watch part of the interview with Zeger below.