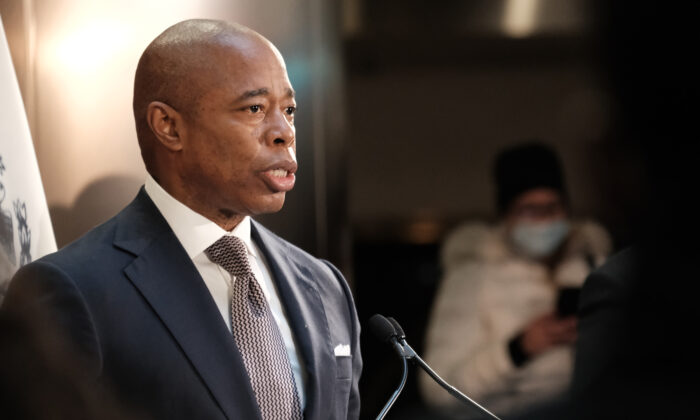 New York Mayor Eric Adams is joined by Governor Kathy Hochul as he speaks during a news conference at a Manhattan subway station where the two politicians announced a new plan to fight homelessness in New York, on Jan. 6, 2022. (Spencer Platt/Getty Images)
NY News

New York City Mayor Eric Adams allowed a measure to become law on Jan. 9 making about 800,000 noncitizens in the city eligible to vote in municipal elections.

“I believe that New Yorkers should have a say in their government, which is why I have and will continue to support this important legislation,” Adams said in a statement. “I believe allowing the legislation to be enacted is by far the best choice, and look forward to bringing millions more into the democratic process.”

The bill was approved by the City Council on Dec. 9, 2021, giving the mayor 30 days to veto; Adams allowed it to become law without any action. Former Mayor Bill de Blasio had expressed concerns about the measure but declined to veto it before leaving office on Dec. 31.

“To me, this is something that I’m not sure is legally what a city can do,” he said during a Nov. 23 press briefing. “I think it’s something the state government needs to do.”

The law applies to legal permanent residents, people with working papers, and so-called Dreamers, as long as they’ve been residents of the city for 30 consecutive days.

“Dreamers” are people who entered the United States illegally as children and were granted amnesty under Deferred Action for Childhood Arrivals (DACA), a controversial executive order signed by President Barack Obama.

The law doesn’t apply to state or federal elections.

These noncitizen voters also can apply to cast an absentee ballot for municipal elections.

Adams was initially concerned about the 30-day residency requirement. But he told CNN on Jan. 9, “After hearing their rationale and their theories behind it, I thought it was more important to not veto the bill.”

He said that in Brooklyn, where he was the borough president, 47 percent of residents don’t speak English at home.

“I think it’s imperative that people who are in a local municipality have the right to decide who’s going to govern them.”

“This radical legislation is unconstitutional, un-American, and downright dangerous. This not only will undermine the credibility of local city elections but will undoubtedly interfere with the integrity of state and national elections across New York State,” Langworthy told reporters before the City Council approved the bill.

“Democrats do not get to create their own brand of citizenship to manipulate elections. This is unconditionally unconstitutional, and we will use every legal method to make sure it’s stopped.”

“About 1.1 million votes were cast in the recent mayoral election. With the addition of some 800,000 foreign nationals to the voter rolls, they will almost certainly have an impact on the outcome of future elections,” Stein said in a Jan. 10 statement. “This number is sure to grow due to an increase in all forms of immigration under President [Joe] Biden, as well as the fact that you only have to live in the city for 30 days to be eligible to vote.”

Former Councilman Ydanis Rodriguez, who sponsored the bill and now serves as the city’s transportation commissioner tapped by Adams, praised the new mayor on Twitter, writing: “Eric has shown once again his relentless commitment to our immigrant communities.

“We build a stronger democracy when we include the voices of immigrants!”

Under the law, the earliest election these noncitizens could participate in would be municipal elections held on or after Jan. 9, 2023.