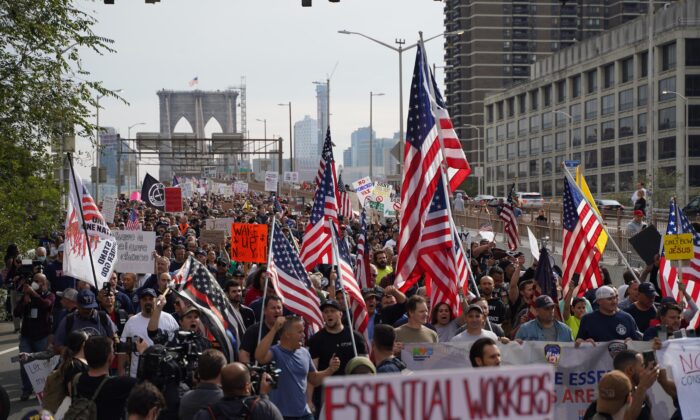 A  Kaiser Family Foundation poll found that more than a third of unvaccinated workers would quit their jobs if their employer required that they either take weekly COVID-19 tests or get vaccinated.

So far, about 5 percent of unvaccinated adults—comprising approximately 1 percent of all U.S. adults—have already left a job due to COVID-19 vaccine requirements. However, the survey’s findings suggest that number may spike if President Joe Biden officially issues an executive order mandating that employers with 100 or more workers have their staff submit to weekly testing or get vaccinated.

Earlier this month, the Biden Department of Labor sent the text of an emergency temporary standard to the Office of Management and Budget for review. It’s not clear if and when the rule will be handed down by the federal government, and details about it—including enforcement—haven’t been disclosed yet.

The mandate is still under review, although White House COVID-19 response team coordinator Jeff Zients told reporters Wednesday that he believes it will be implemented soon.

“The rule will be finalized soon, but we know businesses are already acting,” Zients said during a briefing while downplaying fears that there will be widespread walkouts at key industries including trucking, shipping, and manufacturing over Biden’s vaccine mandate.

While pointing to Tyson Foods, which has a 96 percent vaccination rate, Zients  said that “these processes play out across weeks, not days.”

“We’re creating flexibility within the system,” he added. “We’re offering people multiple opportunities to get vaccinated, there is not a cliff here. And the purpose, most importantly, is to get people vaccinated and protected, not to punish them, so we do not expect any disruptions.”

However, stark warnings from the American Trucking Association, Air Cargo Association, Retail Industry Leaders Association, and others to the Biden administration paint a different picture.

“While much of the country was sequestered in their homes, the trucking industry served its essential function and did so successfully with safety standards developed by public health experts,” American Trucking Association President Chris Spear wrote in a letter to the White House.

If the mandate goes through, up to 37 percent of drivers could be lost due to firings, attrition to smaller trucking firms, or retirements, he went on to say.

The Kaiser Family Foundation also surveyed parents, and it found that 27 percent would “right away” have their 5- to 11-year-old children get the vaccine after an FDA panel recommended Pfizer’s COVID-19 vaccine for that age group. About 30 percent, however, said they would “definitely not” have their child in that age group vaccinated.

About 58 percent of the American population is fully vaccinated, according to recent data provided by the Centers for Disease Control and Prevention.