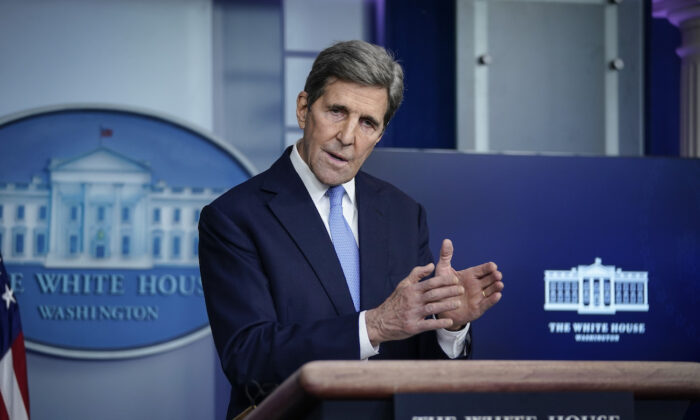 Fifteen Republican State Treasurers sent a warning that they will pull assets from financial institutions if they give in to Federal pressure to de-carbonize and “refuse to lend to or invest in” the fossil fuel and coal industry.

The letter (pdf), led by West Virginia Treasurer Riley Moore, is directed at Special Presidential Envoy for Climate John Kerry. It expresses concerns over reports that Kerry and other members of the Biden administration have been “privately pressuring” U.S. banks to stifle the fossil fuel industry.

“We are writing today to express our deep concern with recent reports that you, and other members of the Biden Administration, are privately pressuring U.S. banks and financial institutions to refuse to lend to or invest in coal, oil, and natural gas companies, as part of a misguided strategy to eliminate the fossil fuel industry in our country,” the letter reads.

The State Treasurers sent a plain message to financial institutions, telling them not to submit to the present administration’s coercion to deny investment and lending for the natural resources.

Furthermore, they assert that the approaches will “discriminate against law-abiding U.S. energy companies and their employees, impede economic growth, and drive up consumer costs,” adding that the strategy in question would make the free market submit to the will of politicians.

The signees of the letter are representing collectively more than $600 billion in assets, according to Axios.

They are backing some of the largest fossil fuel producers in the country.

“As a collective, we strongly oppose command-and-control economic policies that attempt to bend the free market to the political will of government officials,” they write. “It is simply antithetical to our nation’s position as a democracy and a capitalist economy for the Executive Branch to bully corporations into curtailing legal activities. The Biden Administration’s top-down tactics of picking economic winners and losers deprives the real determinate group in our society—the people—of essential choice and agency. We refuse to allow the federal government to pick our critical industries as losers, based purely on President Biden’s own radical political preferences and ideologies.”

The Obama administration’s previous conflict with American coal and natural gas industries is mentioned as an attack on jobs, tax revenue, and health insurance provided to families across the country, specifically hard-working middle-class families.

“As the chief financial officers of our respective states, we entrust banks and financial institutions with billions of our taxpayers’ dollars. It is only logical that we will give significant weight to the fact that an institution engaged in tactics that will harm the people whose money they are handling before entering into or extending any contract,” they warned.