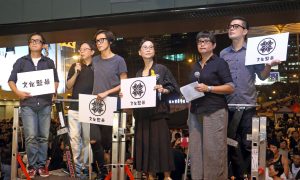 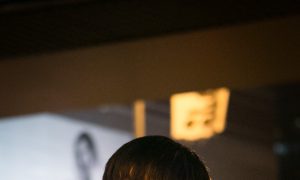 Hong Kong: It's a Difficult Battle, but the Students Should Get Their Say
0
China

As the Umbrella Revolution enters its third week, there has been a concerted effort to stop the pro-democracy newspaper Apple Daily from reaching the people of Hong Kong. Apple Daily has been fighting back.

Beginning on the evening of Oct. 11, hundreds of people began laying siege to Next Media’s building in Hong Kong, blocking the entrances and stopping the distribution of the newspaper, according to Apple Daily.

Photos taken by Apple Daily on Oct. 13 show a group of middle aged males and females sitting around piles of Apple Daily newspapers, blocking them from being distributed. Some of them held banners condemning Apple Daily as a “big traitor.”

In a decision issued at 12:30 a.m. on Oct. 14, a Hong Kong judge responded. He said freedom of the press was very important and issued a temporary injunction that bars protesters from blocking the path into the Next Media building. Next Media owns Apple Daily.

Apple Daily hired a crane to lift papers out of its building into its trucks, but a live video feed on Apple Daily’s site show that at 4 a.m. on the morning of Oct. 14, the crowds, many of whom were wearing masks, blocked the trucks from leaving. A report on the website says the crowd threatened the truck’s drivers.

Police have so far not acted to enforce the court order. This inaction is not surprising. When crowds of thugs have attacked the pro-democracy protesters in Hong Kong, the police have done little to intervene.

Apple Daily’s statement details other forms of interference besides the attempt to block the paper’s distribution.

A number of the newspaper’s employees have received a large amount of harassing phone calls from anonymous phone numbers, with some receiving around 200 anonymous calls in a day, the paper’s statement says.

Apple Daily reporters have been beaten by attackers during interviews, when they were reporting on Occupy Central activities.

Several Apple Daily computers have also received cyber attacks that led to the paralysis of the computer systems and email systems.

Responding to the series of attacks, over 500 employees of the newspaper gathered in front of the Next Media building in Hong Kong to show their insistence on upholding freedom for the press.

The employees held Apple Daily newspapers and yelled slogans together, “Stick to our posts! No hate, no fear! Guard the conscience! Guard Next Media!”

“Since the start of Occupy Central movement, our staff stayed at the protest areas day and night to show completely the truth of the movement,” the Apple Daily statement said, “not letting the Party mouthpiece and pro-government mouthpieces have a monopoly on the public information by calling it a ‘riot’ and ‘political mobilization.'”

“Any suppression of us out of fear of press freedom can only make us believe that we have done the right thing,” the statement said.

Within an hour after Apple Daily posted the employees demonstration for press freedom on its Facebook site, it attracted over 6000 likes and hundreds of comments from Hong Kong netizens to support Hong Kong.

Before the recent harassment, Apple Daily has received a number of cyber attacks to its websites, and has long been blocked from getting advertisements from mainland Chinese businesses. In June 2014, two major British banks that operate in Hong Kong pulled their advertisements from the paper, which an Apple Daily executive blamed on the Chinese regime.

Reporters of Apple Daily have also banned from interviewing in mainland China due to its reports exposing human rights issues in China.

Under pressure from the Chinese Communist Party (CCP), a number of Hong Kong’s mainstream media outlets have condemned the civil disobedience movement as “an illegal activity” and “big chaos,” closely following the line of the Party mouthpiece media in mainland China.