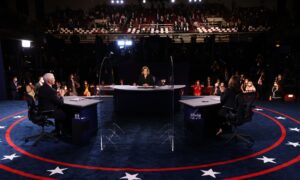 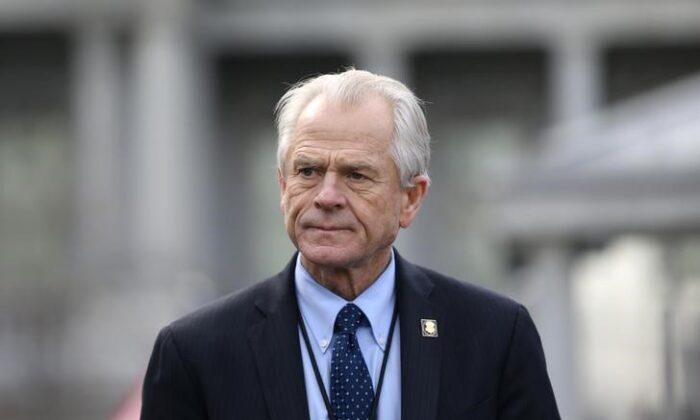 White House trade adviser Peter Navarro listens to a news conference about a presidential executive order relating to military veterans outside of the West Wing of the White House in Washington, March 4, 2019. (Leah Millis/Reuters)
Politics

White House Trade Adviser Peter Navarro told Fox News in an interview Thursday that when China’s communist authorities censored parts of Wednesday night’s vice presidential debate, they did so in a “calculated” bid at deception.

“What China does is they regularly monitor international broadcast,” Navarro said. “You got your seven or 10 second delay. And this was quite calculated on their part.”

The debate between Vice President Mike Pence and Democratic challenger Sen. Kamala Harris (D-Calif.) was broadcast in China on U.S. broadcaster CNN. About 30 seconds of the debate was abruptly cut off as Pence began to criticize the Chinese regime, saying “China is to blame,” referring to the CCP (Chinese Communist Party) virus pandemic that has infected more than 7.5 million Americans—including President Donald Trump—and killed more than 211,000.

What it looks like when China censors a vice-presidential debate after a question about China is asked – and then lifts the blackout when conversation appears set to move on. pic.twitter.com/JgV5yEq7JU

First to report the interruption was Nathan VanderKlippe, the Globe and Mail’s Beijing correspondent, who shared two images of his television screen, with one showing a test image reading, “No signal, please stand by.”

“What it looks like when China censors a vice presidential debate after a question about China is asked—and then lifts the blackout when conversation appears set to move on,” he wrote in a separate Twitter post.

The blocked portion of the debate included remarks from Pence echoing the Trump administration’s line that the Chinese communist regime’s coverup and mismanagement are to blame for the pandemic.

The broadcast resumed when the debate topic changed.

Navarro, in his remarks to Fox News, alleged that the Democratic Party and the Chinese regime were aligned in their efforts to beat Trump.

“What we have is the Democrat Party and the Chinese Communist Party effectively making common cause in the defeat of Donald J. Trump,” Navarro said.

Reports of Chinese censorship of the debate come about a month after the U.S. intelligence community accused China of trying to undermine Trump’s chances at reelection.

The president, in a video on Wednesday from the Rose Garden of the White House, said China will “pay a big price” for what it has done to the United States and the world, referring to the outbreak, which started in Wuhan.

“It wasn’t your fault that this happened, it was China’s fault,” Trump said, referring to the outbreak.

Meanwhile, during the debate, Harris appeared to dodge a question about China.

“How would you describe our fundamental relationship with China? Are we competitors, adversaries, enemies?” asked USA Today journalist and debate monitor Susan Page.

“The Trump administration’s perspective and approach to China has resulted in a loss of American lives, American jobs, and America’s standing,” Harris said, and rebuked the president for allegedly dissolving a pandemic unit.

“For example, they created within the White House an office that basically was responsible for monitoring pandemics,” she added. “They got rid of it.”

Former National Security Advisor John Bolton “dissolved” the White House’s National Security Council Directorate for Global Health Security and Biodefense. But while its head, Timothy Ziemer, the top administration official in the NSC for leading the response against a pandemic left the administration, the staff members were not fired, and many merged into other NSC units.

Tim Morrison, former senior director for counterproliferation and biodefense on the NSC, wrote in an an op-ed in the Washington Post that the notion that the administration was left less capable of dealing with an outbreak due to the elimination of the pandemic unit is inaccurate.

“It is true that the Trump administration has seen fit to shrink the NSC staff. But the bloat that occurred under the previous administration clearly needed a correction. … One such move at the NSC was to create the counterproliferation and biodefense directorate, which was the result of consolidating three directorates into one, given the obvious overlap between arms control and nonproliferation, weapons of mass destruction, terrorism, and global health and biodefense,” he wrote.

“It is this reorganization that critics have misconstrued or intentionally misrepresented. If anything, the combined directorate was stronger because related expertise could be commingled,” Morrison wrote.