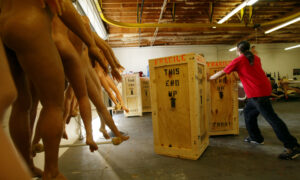 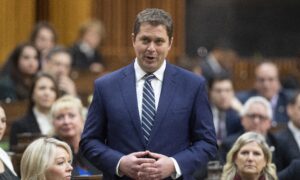 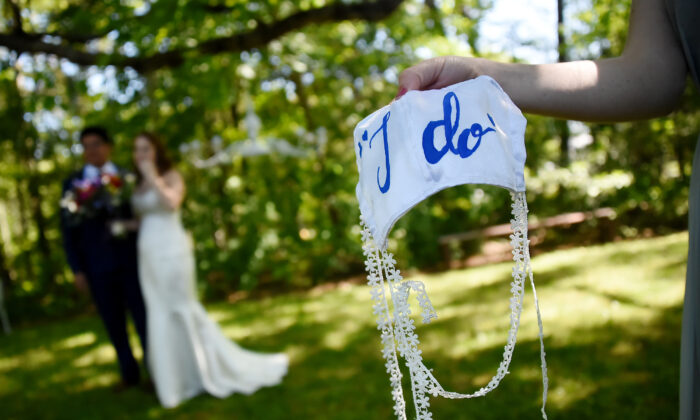 A bridesmaid holds on to the bride's face mask while newlyweds pose for pictures following their wedding ceremony in Rustburg, Va., on May 9, 2020. (Olivier Douliery/AFP/Getty Images)
Judiciary

A federal judge in Kentucky has blocked the city of Louisville from enforcing an anti-discrimination law against a Christian wedding photographer, allowing her to refuse to work same-sex weddings on the grounds that her work is an expression of free speech, and compelling it would be unconstitutional.

“A government can no more compel that speech than it can compel a freelance speechwriter to write for a political candidate she opposes,” U.S. District Judge Justin Walker wrote in a decision on Aug. 14, explaining his rationale for issuing a preliminary injunction (pdf) in favor of photographer and blogger Chelsey Nelson.

Walker essentially sided with Nelson’s portrayal of her work as a form of “storytelling” and expression of free speech, ruling that it would violate her constitutional right for Louisville authorities to force her to express celebratory messages about same-sex weddings through photographs and blog posts.

“Under our Constitution, the government can’t force them to march for, or salute in favor of, or create an artistic expression that celebrates, a marriage that their conscience doesn’t condone. America is wide enough for those who applaud same-sex marriage and those who refuse to,” Walker wrote in the ruling.

Nelson filed a lawsuit against the city of Louisville in 2019 (pdf), in which her attorneys said that “because Chelsey believes that God created marriage to be an exclusive covenant between one man and one woman, Chelsey cannot tell stories promoting or celebrating any wedding or marriage not between one man and one woman, such as same-sex marriage, polygamous marriage, or open marriage.”

Her lawyers argued that “Louisville’s law threatens Chelsey’s storytelling and livelihood,” referring to the city’s rule known as the “Fairness Ordinance.” Passed in 1999, it prevents discrimination based on sexual orientation for housing, employment, and public accommodations.

Walker’s decision prevents the city from enforcing this rule against Nelson while her lawsuit makes its way through the courts. His preliminary injunction indicates he thinks the courts will ultimately determine that the Louisville law violates Nelson’s free speech rights.

“Because the Accommodations Provision compels Nelson to express herself in a manner contrary to her conscience, the Court presumes that the provision—as applied to Nelson—is unconstitutional,” Walker wrote. “To be sure, without discovery or even an answer from Louisville, it’s premature to say Nelson will definitely prevail. But it’s highly likely.”

While Walker sided with Nelson’s argument that her work is a form of expression of free speech and so merits protection from Louisville’s law, he rejected the idea that the ruling flung open the door to discrimination.

“To be clear, most applications of antidiscrimination laws—including Louisville’s Fairness Ordinance—are constitutional. Today’s ruling is not a license to discriminate. Nor does it allow for the ‘serious stigma’ that results from a sign in the window announcing that an owner won’t serve gay and lesbian customers,” Walker wrote.

“In Louisville, since 1999 and still today, Marriott cannot refuse a room to a same-sex couple. McDonald’s cannot deny a man dinner simply because he is gay. Neither an empty hotel room, nor a Big Mac, is speech. And it is unnecessary today to decide any questions unrelated to speech.”

Jonathan Scruggs, a lawyer from the Alliance Defending Freedom who argued in favor of Nelson during court proceedings, hailed the court’s decision.

“Just like every American, photographers, and writers like Chelsey should be free to peacefully live and work according to their faith without fear of unjust punishment by the government,” Scruggs said, Kentucky Today reported. “The court was right to halt enforcement of Louisville’s law against Chelsey while her case moves forward. She serves everyone. She simply cannot endorse or participate in ceremonies she objects to, and the city has no right to eliminate the editorial control she has over her own photographs and blogs.”

The Department of Justice earlier weighed in, issuing a statement of interest in February.

“The central question presented in this case is whether the government can compel a wedding photographer to photograph, provide photography editing services for, and blog about weddings of which she does not approve, and does not wish to photograph or to promote,” wrote Assistant Attorney General Eric Dreiband. “The answer is no.”