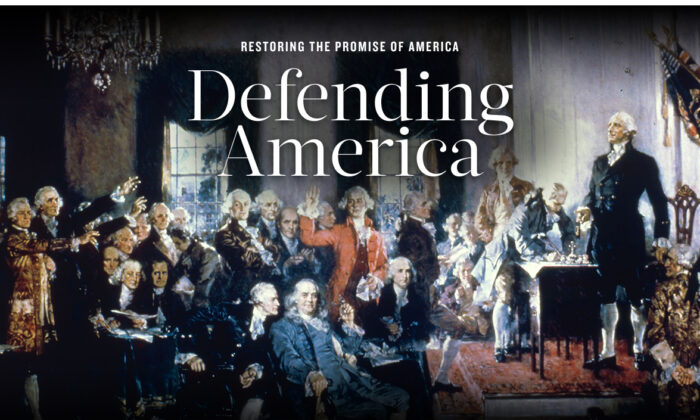 Why The Epoch Times Is ‘Defending America’

Through a new initiative called Defending America, The Epoch Times seeks to remind Americans of the goodness of our country.

Such a reminder should not be needed.

From its beginnings, America has offered its citizens the most important freedom: freedom of belief. It has been a nation where the faithful can practice their religion without fear of persecution.

By protecting fundamental rights, Americans have asserted the dignity of each individual; have guaranteed the rights of free speech, press, assembly and protest, and property, among others; and so have opened the door to individuals who seek to better themselves. With everyone free to pursue their dreams, we have been an inventive, prosperous, and generous people.

From around the world, the best from other nations have been attracted to the United States: those who had the courage to risk everything to come breathe the air of freedom; those with talent who simply wanted the chance to prove themselves; those who wanted to give their families a secure and prosperous life.

The United States has fought wars around the globe to defend freedom and, in times of peace, has developed institutions to promote freedom and prosperity throughout the world.

But the excellence of America is now in dispute, and we are in a time of crisis.

Concerns about election integrity have cast doubt on our most recent presidential election.

Demands for “equity” replacing “equality” are part of a general turn toward socialism.

A cancel culture seeks to censor and silence those who do not toe the line of progressivism, and throughout our society—in schools, corporations, and governments at different levels—there is a new taste for authoritarian ways.

In recent memory, the United States had unquestioned military dominance, but that has now disappeared.

China’s campaign against the United States has been comprehensive. It uses cyber- and conventional spying to steal U.S. intellectual property and military secrets. It infiltrates and subverts American institutions, turning them to serve China’s interests.

It also seeks to change America’s political culture, promoting socialism behind the scenes.

The Chinese Communist Party (CCP) exercises an unprecedented level of control over its population. It requires through a social credit system that every detail of daily life follow the CCP’s demands, uses cameras and visual recognition technology to monitor everyone, and censors email and social media so that people may only receive the CCP’s approved narrative.

It now seeks to export its system around the world. It seeks to defeat America’s promise of liberty with communism and social control.

While the United States is in a moment of crisis, there is no need for panic. In order for Americans to defeat these threats from within and without, one thing is most needed: Americans need to remember why their nation is great. They need to understand and feel the basic goodness of the United States.

The Epoch Times is well-suited to this task. All too often, the negative trends in the United States have been pushed forward by favored narratives in the media and social media. Those narratives often construct an artificial reality through which our situation is viewed, and misunderstood.

The Epoch Times’ motto is Truth and Tradition. It strives to provide news free of an agenda. Independent of corporate or partisan interests, The Epoch Times seeks to provide its readers with the facts. If Americans are given the facts about U.S. principles and history, they will understand how to evaluate our current situation.

The Epoch Times also recognizes the wisdom and beauty in the traditions of the world’s great civilizations. Respecting tradition, The Epoch Times stands on firm ground when it criticizes and rejects the revolutionary doctrines of socialism and communism. If Americans seek, for instance, to understand the wisdom of our Founders, they will find a profound alternative to the confusion of the moment.

Defending America will feature events, special editions, documentaries, and puzzles and contests that both engage and instruct.

By reminding Americans of the promise of our nation, we hope to give our fellow citizens the confidence they need to help put our country back on a sound course.

We hope Americans will join in this effort by spreading the word about our programs and publications to their friends and family.