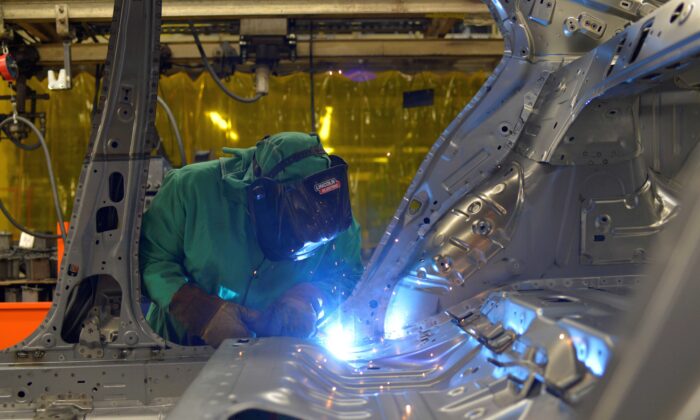 Wholesale prices rose at their fastest annual pace on record in November, with the newest inflation-related datapoint adding to broader concerns about the persistence of elevated prices as higher input costs for producers tend to trickle down to consumers.

The Labor Department said in a Dec. 14 statement that, for the 12 months ending in November, the final demand producer price index (PPI) jumped by 9.6 percent, the highest number in the history of the series, which goes back to 2010. Consensus forecasts predicted a slower 9.2 percent rise in the PPI final demand measure.

On a month-over-month basis, the final demand PPI gauge rose 0.8 percent in November. While that’s lower than the record high 1.2 percent logged in January, it represents an acceleration in wholesale prices from the prior month’s reading of 0.6 percent and a sign that inflationary pressures were once again picking up steam.

Producer prices excluding food, energy, and trade services—a gauge often preferred by economists as it excludes the most volatile components—also shot up in November compared to the prior month’s readings. On a month-over-month basis, so-called core PPI rose 0.7 percent in November, nearly double October’s pace of 0.4 percent. In the year through November, core PPI climbed 6.9 percent, the largest advance in the history of this particular series, which dates back to 2014.

“Not good news—PPI is the wholesale price index, which is a leading indicator for future consumer inflation,” Minnesota state Rep. Kristin Robbins, a Republican, wrote in a tweet.

Allianz chief economic adviser Mohamed El-Erian said in a tweet that the hotter-than-expected PPI jump would make the Fed’s two-day policy meeting, set to conclude on Wednesday, “even more interesting.”

At its prior meeting, the Federal Open Market Committee (FOMC) voted to start phasing out its $120 billion in monthly asset purchases over eight months, though it left the door open to a faster taper schedule if economic data warrants. The above-consensus pace of producer price inflation is likely to feed into policymakers’ deliberations as they mull whether to scale back stimulus faster.

A number of economists have called for a faster taper, with Goldman Sachs analysts recently predicting that high inflation would force the Fed to double its pace to $30 billion per month starting January, bringing the taper to a close in March and paving the way for interest rates to rise.

El-Erian wrote in a Dec. 12 op-ed in Bloomberg that the prior week’s hot consumer price inflation number, which was the highest in 39 years, “reaffirmed other data pointing to an inflation process that is stronger and more persistent than the Fed thought.” He recommended that the Fed move even faster and “go beyond a doubling of the amount by which it reduces monthly asset purchases.”

“The Fed has a simple choice this week. It can either continue with its gross mishandling of inflation or, instead, start regaining credibility and its control of the narrative on inflation and monetary policy,” El-Erian wrote.

Surging inflation has become a key economic concern among U.S. consumers, rising faster than wages and eroding the purchasing power of Americans.