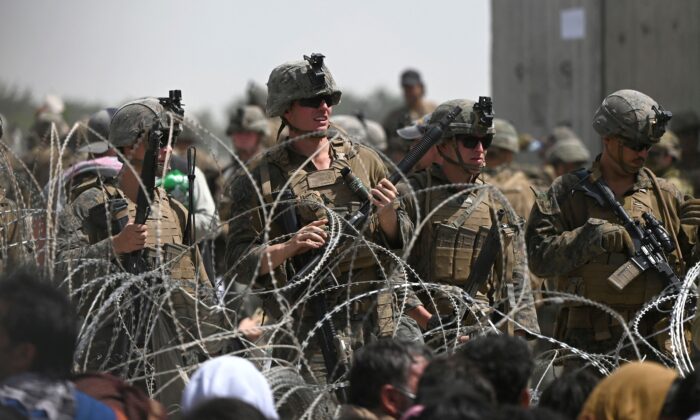 U.S. soldiers stand guard behind barbed wire as Afghans sit on a roadside near the military part of the airport in Kabul, Afghanistan on Aug. 20, 2021. (Wakil Kohsar/AFP via Getty Images)
Afghanistan

US Troops Carried Out Operation to Rescue 169 Americans in Kabul

The operation took place on Wednesday or Thursday, President Joe Biden said while answering questions at the White House.

U.S. troops saw the Americans outside the Hamid Karzai International Airport and decided to act, Department of Defense spokesman John Kirby told reporters at the Pentagon.

Pressed for more details, Kirby said he wasn’t aware of the tactical details, such as whether guns were drawn, or any similar operations. He later told news outlets that the U.S. used three CH-47 Chineek helicopters to fly to the Baron Hotel to grab the Americans and fly the Americans to the airport.

The mission was significant because it’s the first time, according to U.S. officials, that American troops have left the U.S.-held airport to rescue Americans.

Defense Secretary Lloyd Austin told reporters Wednesday that the U.S. military did not “have the capability to go out and collect up large numbers of people.”

The Pentagon has flown more troops in Kabul and security at the airport is more stable, Kirby said. The capability is there now, but each proposed mission would need to be analyzed for potential risks and benefits.

Thousands of Americans remain in Afghanistan, which was taken over by the Taliban this month. Citizens from other countries are also there. Many are trying to get to the airport, along with streams of Afghans who fear suppression once U.S. troops fully pull out, which is scheduled in a few weeks.

Scattered reports allege rescue missions have been carried out by U.S., British, and French special forces.

For instance, U.S. troops allegedly undertook what was described as Operation Promise Kept to rescue Mohammad Khalid Wardak, an Afghan police officer who for years helped the U.S. military and was under threat from the Taliban.

Wardak was rescued at night under the cover of darkness, Robert McCreary, a former congressional chief of staff and White House official under President George W. Bush, who has worked with special forces in Afghanistan, told the Associated Press. The wire outlet published photographs of Wardak and his family after the alleged rescue.

A Pentagon spokesperson did not return a request for comment on the reported mission.

News outlets in Britain and France reported similar operations being carried out by each country’s special forces. The British military, when reached by an Epoch Times reporter, asked for an email containing questions, then did not answer that email.

U.S. Gen. Mark Milley, the Joint Chiefs of Staff chairman, told reporters in Washington this week that the U.S. military had “a variety of special operations forces” in Afghanistan.

He also said there were British special forces and other international special operations forces.

Matthew Pottinger, a deputy national security adviser during the Trump administration, said during an appearance on Fox Business on Thursday that he knew of United Kingdom patrols running into Kabul “to get British citizens, Afghans and in some cases Americans that they encounter, and helping bring them to safety.”

U.S. officials have maintained that Americans are largely able to reach the airport even with the Taliban controlling the ground outside the facility, minimizing the need for rescue missions.

“We haven’t seen that there is that big of a need for that,” Kirby said.