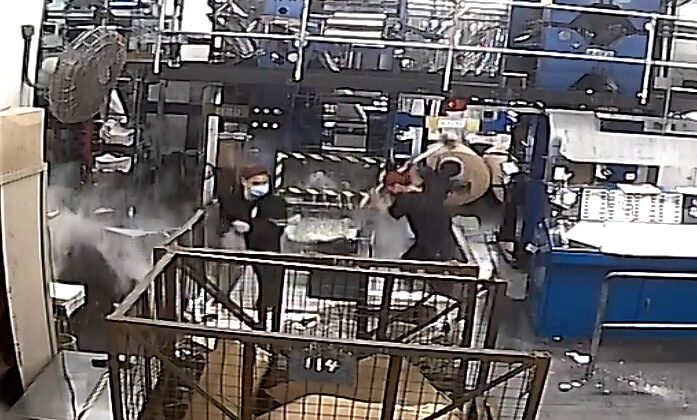 A CCTV screenshot showing intruders dressed in black, one wielding a sledge-hammer, damaging printing press equipment at the print shop of the Hong Kong edition of The Epoch Times on April 12, 2021.(The Epoch Times)
US-China Relations

U.S. lawmakers on April 12 condemned the latest attack on The Epoch Times’ printing press in Hong Kong, saying it wouldn’t be a surprise if the Chinese Communist Party (CCP) was behind the incident in an attempt to silence reporting that’s critical of the regime.

In the early hours on April 12, four men wearing face masks—two of whom wielded sledgehammers—barged into the printing warehouse and smashed machinery and computers for around two minutes before leaving with a computer.

No staff members were injured during the incident.

The intruders caused extensive damage, and the newspaper’s Hong Kong edition has been forced to suspend its operations for the foreseeable future.

The attack is the fifth time the site has been vandalized since its establishment in 2006, and came less than 18 months after four masked intruders set fire to the same facility during the height of the pro-democracy protests in the city. Those perpetrators were never caught.

“The repeated, violent attacks on The Epoch Times shock the conscience,” Rep. Devin Nunes (R-Calif.) told The Epoch Times in an emailed statement. “Clearly, the Chinese Communist Party and its street thugs cannot abide any media outlet reporting the facts about the Party’s depredations.”

With much of Hong Kong’s media exhibiting pro-Beijing leanings in recent years, the Hong Kong edition of The Epoch Times is one of the few independent media in the city that covers the CCP’s abuses in mainland China, Hong Kong, and abroad.

“At a time when America’s corporate media have adopted the self-righteous slogan ‘speak truth to power,’ The Epoch Times has the courage to actually do it, and they are paying a high price for sticking to their principles,” Nunes said.

Rep. Scott Perry (R-Pa.) described the CCP’s rule as a “thugocracy” that “relies on intimidation, extortion, and violence to suppress freedom and those who strive for truth and self-government by consent.”

“It would be no surprise if the CCP were behind such an attack as they consistently seek to extinguish any light that exposes the dark sea of repression that keeps their illegitimate government afloat,” Perry said in an emailed statement.

“The freedom of the press in Hong Kong is under attack from the Chinese Communist Party,” Banks said in a statement.

Press freedom in Hong Kong has gradually eroded since the city was transferred from British to CCP rule in 1997. Once a bastion of press freedom in Asia, the city has fallen to its current ranking at 80th place in the Reporters Without Borders’ World Press Freedom Index, from 18th in 2002.

The slide was a result of “pressure from Beijing,” according to the nonprofit.

Meanwhile, the CCP’s imposition of a draconian national security law has sparked fears of a further tightening of press freedom in the city. The law, which took effect last July, punishes what Beijing deems to be acts of secession, subversion, terrorism, or collusion with foreign forces, with a maximum penalty of life imprisonment.

Since then, dozens of pro-democracy figures, including media mogul Jimmy Lai, have been charged or convicted under the legislation or similar laws.

Other lawmakers reacted with a tone of defiance.

“We will not back down to [the CCP’s] intimidation tactics,” Rep. Greg Steube (R-Fla.) said in a statement. “This event should not stop publications like the Epoch Times from speaking out against the CCP’s actions and humanitarian crimes.”

Rep. Michelle Steel (R-Calif.) said that if the CCP is found to be behind the attack, it should be held accountable, while Rep. Brian Babin (R-Texas) said in a statement that the attack is another attempt by the regime to “silence the voices of truth-tellers in Hong Kong.”

“I’m praying for my fellow freedom-lovers living under the CCP’s repressive regime,” Babin added. “May they remain steadfast and courageous in their pursuit of the truth!”

“Now more than ever, the United States must stand up for democracy and human rights, and fight against Communist China’s aggression and quest for global dominance,” Scott said in a statement.