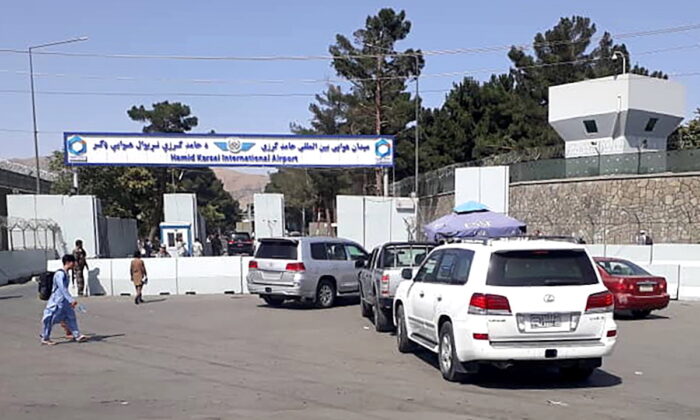 The U.S. Embassy in Afghanistan advised Americans to “shelter in place” amid reports that the Kabul Airport, one of the main exit points from Afghanistan, is taking fire from Taliban terrorists.

In a bulletin sent out on Sunday, the U.S. Department of State said that “the security situation in Kabul is changing quickly including at the airport.”

“There are reports of the airport taking fire; therefore we are instructing U.S. citizens to shelter in place,” the agency wrote. It added, “Do not call the U.S. Embassy in Kabul for details or updates about the flight.”

Afghan government forces, meanwhile, turned over nearby Bagram airbase to the Taliban, according to district chief Darwaish Raufi, reported The Associated Press. About 5,000 prisoners held by both the Taliban and ISIS at the airbase were released, officials said.

It comes as the Taliban, in a statement, announced that it would direct its members to enter Kabul, the capital of Afghanistan, after surrounding the city of 6 million. Around the same time, a top Afghan official confirmed President Ashraf Ghani fled the country.

The group, which has long been considered a terrorist organization by the State Department, made swift advances across the South Asian country weeks after President Joe Biden announced the unconditional withdrawal of all American troops after 20 years of occupation.

A few hours before the embassy’s alert was sent out, Secretary of State Antony Blinken confirmed to ABC News that personnel was being evacuated from the embassy building to the Kabul airport.

“We are working to make sure that our personnel are safe and secure,” Blinken said during an ABC News interview on Sunday. “We’re relocating the men and women of our embassy to a location at the airport. It’s why the president sent in a number of forces, to make sure that as we continue to draw down our diplomatic presence we do it in a safe and orderly fashion,” he added.

But the secretary rejected the notion that the evacuation of embassy staff is similar to the 1975 fall of Saigon when Vietnamese communist forces overran the country and forced American diplomats and others to flee on helicopters that were perched atop the embassy building.

“Let’s take a step back. This is manifestly not Saigon,” Blinken interjected.

The 2001 invasion of Afghanistan, he added, succeeded in taking out Osama bin Laden and reducing the capacity of the al-Qaeda terrorist group, which was being harbored by the Taliban.

President Joe Biden on Saturday authorized the deployment of 5,000 U.S. troops to help evacuate citizens, an increase of the 3,000 troops that were initially deployed.