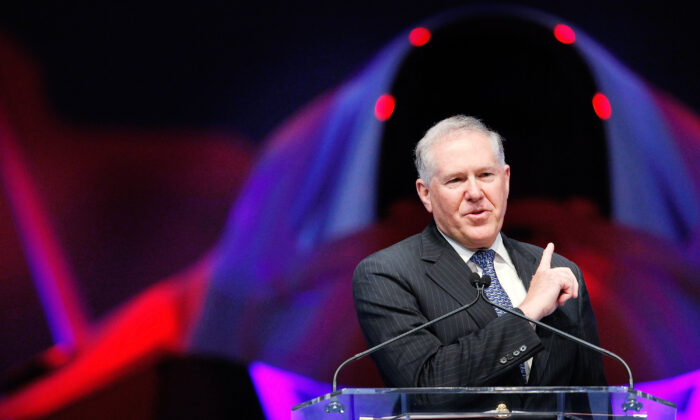 US, China Are in ‘Arms Race’ to Develop Hypersonic Weapons, US Air Force Secretary Says

The United States has some catching up to do in its arms race with China to develop hypersonic weapons, U.S. Air Force Secretary Frank Kendall said on Nov. 30.

China allegedly tested two hypersonic weapons this summer, according to reports by the Financial Times. The first test involved launching a rocket carrying a nuclear-capable hypersonic glide vehicle (HGV) into low Earth orbit, before launching two missiles midflight in the atmosphere. Details of the second test haven’t been reported.

Hypersonic weapons can travel at Mach 5, or faster than five times the speed of sound. They could, in theory, be maneuvered to arc over the South Pole to evade U.S. missile defense systems, which are located in the Northern Hemisphere.

In late October, Army Gen. Mark Milley, chairman of the U.S. Joint Chiefs of Staff, expressed concerns about the alleged test, saying it was “very close” to a “Sputnik moment.” The top U.S. general was alluding to the Soviet Union’s launch of Sputnik, the world’s first artificial satellite, in October 1957, which raised serious concerns that the United States was falling behind the Soviet Union in technological advancement.

Beijing has denied testing hypersonic weapons. When asked about the two tests that allegedly occurred this summer, China’s foreign ministry spokesperson, Wang Wenbin, said at a daily press briefing on Oct. 21 that there was one test, which was a “routine test of spacecraft to verify the technology of spacecraft’s reusability.”

Kendall said the U.S. military has focused funds on Afghanistan and Iraq, but hasn’t set its sights directly on hypersonic weapons, according to Reuters.

“This isn’t saying we’ve done nothing, but we haven’t done enough,” he said.

The U.S. military has held several hypersonic weapons tests this year. The U.S. Navy reported on its website on Oct. 21 that its joint military tests a day earlier with the U.S. Army were successful, when three separate rocket launches demonstrated “advanced hypersonic technologies, capabilities, and prototype systems in a realistic operating environment.”

As Pentagon officials await its 2023 spending budget, Kendall says he hopes to move funds from older military systems to new systems such as hypersonic development programs.

Some experts have said that China’s deployment method for its hypersonic weapons is akin to the Soviet concept called Fractional Orbital Bombardment System (FOBS). The Soviet Union developed the same system in the hope of guiding nuclear warheads over the South Pole, to take out north-facing North American Aerospace Defense Command’s ballistic missile early-warning system.

China’s hypersonic weapons pose a threat not only to the United States but also to Taiwan, a key U.S. ally in the Indo-Pacific, according to Rick Fisher, a senior fellow at the International Assessment and Strategy Center.

“Taiwan’s underground command and control facilities and its eastern network of military tunnels would be highly vulnerable to HGV warheads with high impact power,” Fisher wrote in an article that was published on the website of Taiwan’s think tank Prospect Foundation on Nov. 15.

China sees self-governing Taiwan as a part of its territory to be united with the mainland, by force if necessary.​​ ​​In October, Taiwan’s defense minister warned that the Chinese military, the People’s Liberation Army (PLA), would be capable of mounting a full-scale invasion of the self-ruled island by 2025.

“But perhaps the greater threat to Taiwan is indirect,” Fisher wrote.

“Unique PLA FOBS-HGV weapons, when added to the PLA’s ongoing sprint to nuclear superiority, revive the threat of ‘strategic decoupling,’ or an ability to coerce Washington from fulfilling strategic commitments to defend its allies or partners such as Taiwan.”