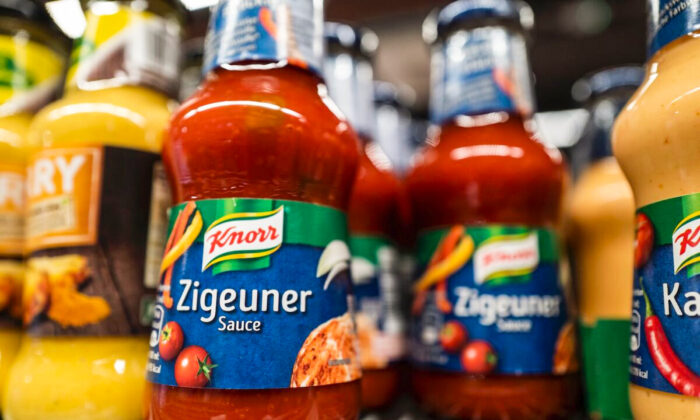 Bottles of "Zigeuner Sauce" (Gipsy Sauce) by German food maker Knorr are on display at a supermarket in Berlin on August 17, 2020. - German food maker Knorr said Monday it would change the name of its popular "gypsy sauce" to something less offensive, becoming the latest global company to respond to complaints about racist branding. The so-called "Zigeunersauce" (German for gypsy sauce) will soon be sold as "Hungarian-style paprika sauce", Knorr's parent company Unilever said in a statement sent to AFP. (Photo by John MACDOUGALL / AFP) (Photo by JOHN MACDOUGALL/AFP via Getty Images)
Business & Economy

Unilever announced on Thursday that it has hiked up prices to cope with rising supply chain costs, and warned that inflationary pressures would linger for at least a further year, as economies recover from the pandemic.

The British multinational consumer goods company that makes Dove soap and Knorr soup said that in the third quarter it increased prices by 4.1 percent to “offset rising commodity and other input costs.”

The move “is a step up from the first half of the year,” Unilever said in a statement, noting that it is taking pricing action to offset rising commodity and other input costs.

According to Bloomberg, the price hike is the fastest in nine years. Chief Executive Officer Alan Jope told Bloomberg Television in an interview that he predicts at least another 12 months of inflationary pressure.

“Peak inflation will be in the first half of 2022, and it will moderate as we move towards the second half,” Jope said, adding that the company will introduce productivity measures to offset higher prices.

The company’s finance chief Graeme Pitkethly told reporters on a media call that Unilever expects inflation could be higher in 2022 than this year, adding it was likely to peak in the first half of next year and level out thereafter.

The maker of Ben & Jerry’s ice cream said underlying sales rose 2.5 percent in the three months ended Sept. 30, above the 2.2 percent forecast by analysts in a company-supplied consensus.

Growth was helped by demand in the United States, India, China, and Turkey, while the 4.1 percent increase in prices more than offset a 1.5 percent decline in volumes.

The price hike was up sharply from the 1.6 percent increase in the second quarter and Pitkethly warned there would be another step up in the fourth quarter that would continue into the first half of next year.

Separately, rival Nestlé said on Wednesday said that it had raised prices 1.6 percent in the nine months to September, while Procter & Gamble announced that it would also raise prices further.

Inflation in the consumer goods industry has been running in the high-teens, though Unilever said it was seeing a lower impact because of its negotiating power and hedging.

“We continue to responsibly take pricing and that’s in relation to the very high levels of inflation we’re seeing,” Pitkethly said.