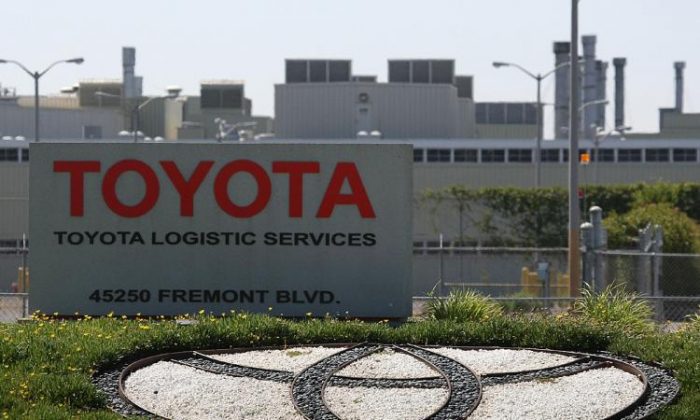 A Toyota sign at the Nummi plant, in a file photo. (Justin Sullivan/Getty Images)
Companies

Toyota announced on Oct. 18 that it will invest $3.4 billion in automotive batteries in the United States, including nearly $1.3 billion in an unnamed battery plant that’s expected to employ 1,750 new workers.

The new production, expected to begin in 2025, will allow the automaker to develop its own lithium batteries for use in future hybrid models of its U.S.-built vehicles.

“Toyota’s commitment to electrification is about achieving long-term sustainability for the environment, American jobs, and consumers,” Ted Ogawa, chief executive officer of Toyota Motor North America, said in a company statement on Oct. 18.

“This investment will help usher in more affordable electrified vehicles for U.S. consumers, significantly reduce carbon emissions, and importantly, create even more American jobs tied to the future of mobility.”

By 2030, Toyota anticipates selling 2 million zero-emission vehicles worldwide. Between 1.5 million and 1.8 million are expected within the United States, according to the company’s statement.

In a separate announcement, the automaker also revealed its new expansion for the 2022 Tundra at its Huntsville, Alabama, manufacturing plant. The new engine will include a hybrid electric-powered twin-turbo V6 engine alongside its gas-powered engine.

“Our team members in Alabama recognize the confidence and trust Toyota places in us since we are the only plant selected to build engines for the all-new Tundra,” Jason Puckett, president of Toyota Alabama, said in a statement.

“Launching the new twin-turbo V6 line and celebrating our 20th anniversary remind us here just how lucky we are to have such incredible team members who have made Toyota Alabama known as ‘the engine capital of the world.’”

Toyota is one of several leading automakers to recently announce plans to manufacture their own batteries as the industry increasingly shifts toward electric vehicles. Chrysler also expects to build its own battery plant in the United States.

German automaker Volkswagen announced in March its plans to build six new battery factories worldwide as it aggressively transitions away from gas-powered vehicles.

Volkswagen also plans to expand its network of charging stations as part of its new global initiative.