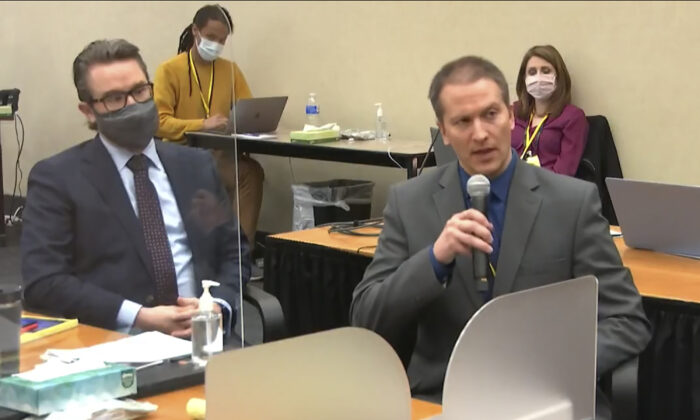 In this image from video, defense attorney Eric Nelson (L) and defendant, former Minneapolis police officer Derek Chauvin, address Hennepin County Judge Peter Cahill during motions before the court in the trial of Chauvin, at the Hennepin County Courthouse in Minneapolis, Minn., on April 15, 2021. (Court TV via AP)
Viewpoints

The Chauvin Trial and the Ongoing Quest for Justice

This is the most difficult column I have ever written. Like so many other Americans, I’m having a difficult time keeping my emotions in check about the trial of Derek Chauvin. But one of the most important human faculties is the faculty of reason, and so I’ll try to keep my emotions in check and offer what I hope are some reasonable perspectives on various aspects of this tragic case.

Let’s start with the obvious: George Floyd’s death was not only tragic, but deeply disturbing. The images of what happened are horrific, searing, painful. Americans are yearning for justice, but we’re not united about what justice looks like in this case.

I’m reminded of a story (whether apocryphal or true, I know not) that I heard when I was in law school about a half-century ago. A student was deeply offended by the outcome of one of the cases his class had studied. “That is NOT just!” he protested. Whereupon the law professor calmly said, “If it’s justice you want, go across the street and enroll in the divinity school. This is the law school.” Sadly, attaining justice through our legal system is a hit-and-miss proposition. However, we have no alternative to our legal system short of mob violence or vigilantism in the pursuit of justice, so please bear with me as we look at the case through a legal lens.

Legally, it was wrong and unjust for George Floyd to die that day. While Floyd might have violated at least three laws—allegedly passing counterfeit currency, illegal drug use, and resisting arrest—he didn’t commit a capital offense, and so his death is a travesty.

(Let me offer one comment on resisting arrest: Everybody—regardless of age, gender, race—please, please don’t resist arrest. Doing that increases the danger to your life, and it just isn’t worth it. And to those who argue that police officers should let those they are trying to arrest run away and not use force to detain them, what kind of disrespect for the law, what kind of anarchy are you promoting? When an officer arrests a person, it isn’t an invitation that a person may accept or decline. There’s no option for the detainee to say, “No thanks, officer, I’ve got other plans for today, so see you later.”)

Given that an unjust death occurred, the legal question then becomes, were the officers present with Floyd at the time of his death legally and criminally responsible? That’s what the Chauvin trial is trying to determine. It’s the jury’s prerogative in our judicial system to make this determination. Like so many Americans, I rushed to form my own personal conclusion last year. When I commented on the need for “weeding out bad apples” last summer, the version I submitted included inflammatory and prejudicial language about the nature of Floyd’s death. My editors wisely removed that language. While I’m entitled to feel outrage and revulsion at the image of a man kneeling on the neck area of another man for over nine minutes until the other man was dead, it’s up to the jury to determine legal culpability.

Indeed, the jury has had the opportunity to ponder whether Chauvin’s weight did or didn’t block Floyd’s windpipe; whether Chauvin was implementing accepted police practices; whether he should have been expected to have sufficient knowledge to recognize signs that Floyd was under the influence of a drug that greatly increased the danger of death, etc.

One disturbing aspect of the trial to me was the efforts by the prosecution to exclude autopsy results from consideration by the jury. It’s hard to respect a legal system that expects individuals to testify to “the truth, the whole truth, and nothing but the truth” and then allows attorneys to manipulate problematical rules of evidence to shield pertinent information from the jury. Where is the justice in that?

I was thinking, too, of the unfortunate bystanders who saw George Floyd die, and how traumatic that must have been for them. And what a moral dilemma they were presented with: Several spoke up, pleading with Chauvin to ease up. That was a humane, moral impulse. In retrospect, it’s easy to see that of course Chauvin should have eased up. Yet, what if their pleas aggravated the situation? Nobody likes it when outsiders tell them how to do their job. And in the case of police, who want to project the image that they’re in control of a situation, might not an officer feel that the last thing he can afford to do is accept direction from random passersby? Is this a case in which good intentions had counterproductive consequences? I don’t know. I’m just glad I wasn’t in their shoes.

Of great concern to me, as to many, are current and future reactions to the trial by people who never knew George Floyd or Derek Chauvin.

A Black Lives Matter organizer in Minnesota told a journalist, “The Black community needs a win.” One can dismiss this as reflecting the political agenda of a radical organization, but I’m sure there are many non-Marxist blacks who, believing that “their people” have long been unfairly singled out and persecuted, feel that the system “owes them one.” What society owes them is justice, and that may indeed mean that significant reforms need to take place. But justice isn’t built on injustice. If, according to the laws of the land and the deliberations of the jury, Chauvin is not guilty, then that verdict, however disappointing, must be respected if we, as a society, are truly committed to justice.

Particularly reprehensible are the sadly typical inflammatory remarks of Rep. Maxine Waters (D-Calif.), who is basically calling for violence if a “not guilty” verdict is returned. Has her Twitter account been shut down? Inciting violence is not something that even a congressperson should be able to do with impunity.

One positive arising from George Floyd’s death is a rethinking of the policing function in society. Some are calling for more resources to be devoted to drug treatment and mental health experts. Indeed, there are times when police respond to a domestic disturbance when family counselors and social workers could prove to be more effective than armed officers. It’s important, though, to avoid going to the extreme of “defunding” or “dismantling” police forces. In Floyd’s case, for example, when the call came in reporting that someone was passing counterfeit currency, you wouldn’t send out a social worker to deal with that. Ditto for more dangerous situations in which weapons are present.

Actually, the Floyd/Chauvin case has already provided a preview of the negative consequences of what defunding police would look like in practice. In the aftermath of Floyd’s death and the subsequent riots, more than 200 officers left the Minneapolis police department. That reduction in force resulted in a substantial increase of violent crimes in Minneapolis.

Even in Minneapolis’ so-called “autonomous zone” that police have steered clear of so as to avoid clashes with activists, the result has not been an area of peace and justice, but instead a surge of gun violence. The noticeable increase in violence prompted a lawsuit by citizens seeking to force the city to beef up police protection. Indeed, one local poll showed that 65 percent of black respondents either opposed or were unsure about shrinking police forces. Most Americans (no surprise here) desire protection from criminals, anarchists, and revolutionaries.

In closing, the tragedy of Floyd’s death presents us with a choice: We can learn important lessons and implement reforms that bring us closer to our ideal of justice, or, if we opt for raging violence against innocent citizens and their property, we can set the cause of justice back a long way. The attainment of justice isn’t easy and is far from perfect, but the basic principle of the rule of law, however flawed in its implementation by imperfect human beings, is much to be preferred over mob violence and anarchical non-solutions.