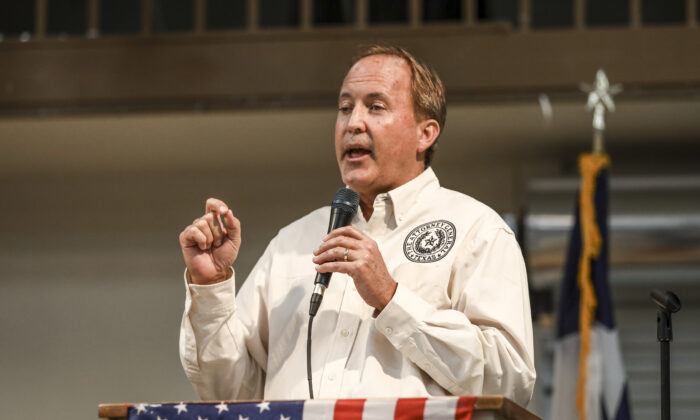 In an 8–1 decision on Dec. 15 (pdf), the Texas Court of Criminal Appeals stated that “the Attorney General can prosecute [election cases] with the permission of the local prosecutor but cannot initiate prosecution unilaterally.”

At issue is a provision in Section 273.021 of the Texas Election Code, which reads, in part, “The attorney general may prosecute a criminal offense prescribed by the election laws of this state.” The court stated that the provision violates the separation of powers clause in the Texas Constitution.

The ruling was tied to a case involving a southeast Texas sheriff who faced campaign finance violation charges. The Texas Rangers had found that Jefferson County Sheriff Zena Stephens, during her 2016 run for sheriff, allegedly accepted individual cash campaign contributions that exceeded $100, which is a violation of campaign finance law.

The Jefferson County District Attorney’s office declined to prosecute Stephens, after which Attorney General Ken Paxton brought the Texas Rangers’ investigation to a grand jury in neighboring Chambers County, and relied on a grant of prosecutorial authority provision in the Texas Election Code Section 273.021 to do so. The grand jury later indicted Stephens on three criminal counts in April 2018: a felony count of tampering with a government record, as well as two counts of unlawfully accepting cash contributions.

Stephens appealed and argued that the provision in Section 273.021 violates the separation of powers doctrine in the Texas Constitution. She also argued that the county and district attorneys are part of the judicial branch of government while the attorney general is in the executive branch.

The Texas Court of Criminal Appeals on Dec. 15 sent the case back to the Chambers County trial court and ordered the indictments against Stephens to be dismissed. Members of the panel wrote in the majority ruling, “Any attempt to overlap the Attorney General’s constitutional duties with county and district attorneys’ constitutional duties in the sense of a Venn diagram of sorts is unconstitutional.”

The court noted that the Texas Constitution “expressly divides the powers of government into three distinct departments—legislative, executive, and judicial—and prohibits the exercise of any power ‘properly attached to either of the others,’ unless that power is grounded in a constitutional provision.”

The Dec. 15 decision overturns a previous ruling by a lower court, the 1st Court of Appeals, which had found that the provision in Section 273.021 of the state’s election code “clearly and unambiguously gives the Attorney General power to prosecute criminal laws prescribed by election laws generally whether those laws are inside or outside the Code.”

Paxton denounced the ruling on Twitter, writing: “Now, thanks to the Texas Criminal Court of Appeals, Soros-funded district attorneys will have sole power to decide whether election fraud has occurred in Texas.

“This ruling could be devastating for future elections in Texas.”

Christian Menefee, county attorney for Harris County, the largest county in Texas, praised the decision on Twitter: “NEW: it’s now the law that the TX AG *cannot* unilaterally prosecute folks for violating election laws. It’s up to local prosecutors. This is a big win for local government and Texans who are tired of state officials exaggerating voter fraud claims to undermine elections.”