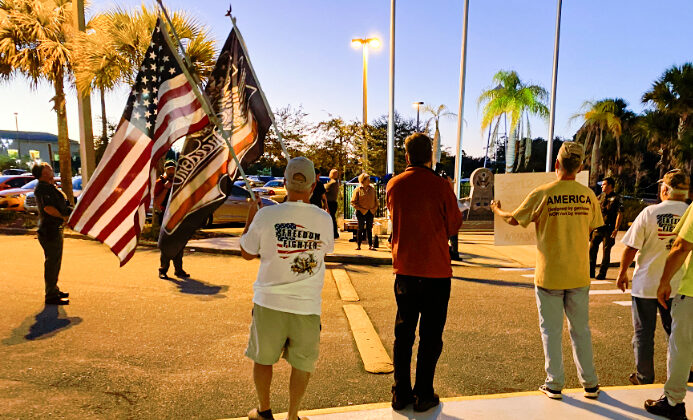 Protesters gather outside the county building during a Flagler County School Board Meeting on Nov. 16, 2021. (Patricia Tolson/The Epoch Times)
Florida

'Had the school board complied with the law ... it would go to the state attorney's office'
By Patricia Tolson
biggersmaller
Print

BUNNELL, Fla.—Tempers flared at a Nov. 16 Flagler County School Board workshop, followed by a contentious school board meeting where protests and public statements from both sides went on late into the night in an ongoing debate over a book and a criminal report.

The Epoch Times had earlier reported that Flagler County School Board Member Jill Woolbright filed a criminal complaint over a sexually graphic book—found to exist in the media centers at three Flagler County schools—which she believes violates state obscenity laws.

At the Nov. 16 workshop, Director of Teaching and Learning LaShakia Moore admitted several parents had “raised different concerns with some of the resources being used.” According to Moore, while current policy “does a great job of outlining steps” on what to do when any educational material is challenged, the district needs to “look at opportunities for updating this policy specifically to align with state statute.”

During the school board workshop, School Board Attorney Kristy Gavin admitted that Flagler County school board policy was not updated when the Florida Criminal Obscenity law was passed in 2017, adding that “the majority of the school districts in the state have outdated policies.”

Gavin further stated she had just attended a conference where “an inquiry of the books mentioned” during the workshop were mentioned by other districts, citing Orange, Lee, and Martin counties as also having “these books” brought to question.

Moore said four books were currently in their “challenge process”: “All Boy’s Aren’t Blue,” “Stamped,” “The Hate You Give,” and “Speak.” To Woolbright, Moore was unfairly placed in a precarious position by Gavin’s failure to call attention to the new law and by her failure to advise the Board that policy needed to be revised to comply with the new law.

“The school board never approved this book getting into the schools that I’m aware of,” Woolbright had told The Epoch Times. “I believe that it was a crime and that it was a felony and I was assured they would take care of it.

“The elephant in the room is that it has been out on social media that it was me who asked for the other books to be removed and I want to clear the air because the truth needs to be told,” Woolbright said at the Nov. 16, workshop. “The truth is I spoke specifically about one book.”

Woolbright also noted how a local blogger, Pierre Tristam, had written a “hit piece,” fueled with misinformation he received through Gavin and FCSB Vice Chair Colleen Conklin, a charge neither denied.

Through frequent interruptions, Conklin put her animosity toward Woolbright on uncomfortable display. Her berating of Woolbright became so intense that Board Member Janet McDonald called for a recess. While others made efforts to bring the meeting back to order, Conklin shouted over them, refusing to stop her attack on Woolbright, even as School Board Chair Trevor Tucker repeatedly told her to stop.

Even after order had resumed at the meeting, Conklin touted the value of George Johnson’s book “All Boy’s Aren’t Blue,” because it had received awards, which she took the time to catalog and read aloud, one-by-one. However, McDonald quickly noted that those awards—none of which are from literary organizations—did not supersede Florida law.

Massaro also attempted to compare the known presence of a sexually graphic book in multiple school libraries in Flagler County to the fact that kids can access pornography and listen to vulgar music on their cell phones. She then berated Woolbright for filing a criminal complaint with the sheriff’s department.

“Who does that?” Massaro scoffed, asking if anyone else “in the whole United States” had ever filed a complaint about vulgar books in a school.

As The Epoch Times reported on Aug. 2, a lawsuit was filed against Broward County Public Schools regarding the “very pornographic” content in books available through their libraries to children as young as 4 years old.

“Whether the policies were outdated or not,” Conklin insisted that Woolbright’s effort to expose the book was nothing more than “political drama” and that “filing a police report” was in fact “breaking the policy,” regardless of the new law that made existing policy obsolete.

Conklin then complained that the story exposed the chaos in Flagler County and “left the impression” that they “were backward.” Conklin then accused any Flagler County parents who opposed the vulgar book of being part of a conspiracy and following “a playbook” being shared by fringe groups for the purpose of “taking down” school board members.

While Conklin and others try to describe “All Boys Aren’t Blue” as “an award-winning book,” McDonald noted that the awards are for the artistic cover and for the issues it brings out regarding certain groups that are trending socially. None of the awards were given for literary excellence.

Later, at the 6 p.m. school board meeting, protesters gathered outside of the building, along with a notable presence of law enforcement. Students, organized by Flagler County student Jack Petocz, distributed copies of Johnson’s book. Inside, the boardroom was standing room only. An overflow crowd gathered just outside the doors.

During public comments, one Flagler parent wanted to address what she saw as “an abuse of power,” reiterating Tristam’s claim that Woolbright wanted to “ban books.” Tristam also made an inaccurate claim that a sheriff had been “summoned” to pull the books from the school.

Another Flagler resident attempted to read excerpts from another book—also full of vulgar language—which she discovered is available to children in one of the Flagler County high school libraries. However, FCSB Chair Tucker forbade her to do so. The irony of his reasoning—because “there were children in the room” and might be watching the livestream—was not lost on many seated in the room.

Flagler County teacher Regina Lee insisted Woolbright had been “set up by a very small group of people with an agenda to do the dirty work” and insisted the whole endeavor was “planned.” However, she did not identify who was supposed to be in charge of her alleged conspiracy. Lee said the conspiracy to ban LGBTQ+ books had “hit” other counties—such as “Brevard, Orange and Volusia”—and it was “on The View” that other states had also banned Johnson’s book. She also alleged that Woolbright had “somehow” been “given” a list of “LGBTI+” books with “instructions” to see if they were in the library.

“Your statute 1014 Parents Bill of Rights totally removes education from the children by professionals and you, takes it away from the people who have studied education and put it into uneducated or educated parents hands,” Lee stated.

Eye rolls and head shakes of disbelief spread through the room as she alleged “the controversy seems to be part of a QAnon or other fringe group attempt to destroy both black and LGBT+ ability to have representation in books.”

Flagler County student Jack Petocz reiterated Tristam’s narrative that Woolbright was trying to “ban” four books. He repeated Conklin’s opinion that the numerous “accolades,” given to Johnson’s book—in which he describes an incestual relationship as a child with an adult cousin and graphic detailing of sexual acts—exempted the memoir from Florida’s obscenity law.

One resident, Leslie Johnson, congratulated Woolbright during the public comments section for “stepping up and doing what was right.” Because of her alleged incompetence in the matter, Johnson called for Gavin’s resignation.

Not allowed to address school board members by name, another resident, Patricia Hooper, admonished the board member “sitting right in front” (Conklin) for attacking Woolbright on social media by accusing her of “not being a team player.” Hooper replied: “I don’t want ‘a team player,’” saying she wanted a school board member who would stand up for the children. “She exposed your hypocrisy,” Hooper charged. Hooper also called for Gavin’s resignation.

Several more parents thanked Woolbright for her efforts to protect their children. Another resident called for Gavin’s resignation.

In her closing statement, Woolbright called out Tristam and his blog, Flagler Live, calling it “Flagler Lies” and “fake news.” She reiterated the misinformation he had perpetuated, and explained that all she wanted was to have three of the books “looked at” and to have Johnson’s book pulled because she believes violates Florida’s obscenity laws.

“So if you want to silence someone and spin the political agenda then you make sure that the whole world thinks they don’t like black people or anybody from the LGBTQ community,” Woolbright asserted. “Then you have a fire that goes rampant.”

Against the accusations being thrown at her by her opposition, Woolbright insisted she didn’t care about Johnson’s color or the fact that he identified as “queer” with the pronouns of “they/them.” Then Woolbright dropped “a little bit” of a bomb she had never shared publicly before. The person some labeled as a “white woman” of “privilege” had grown up “in an extremely abusive home” and was sexually abused by her own father. “So don’t talk to me about trauma,” Woolbright charged her critics, saying she too “could write a book that would make you uncomfortable to read it.”

However, while Woolbright said she fully understands the trauma, triggers, and suicide risks of those who suffered from sexual abuse, she doesn’t understand why Flagler County has “school board members and an attorney who don’t want to follow the law.”

“My understanding is the school board and the superintendent has been relaxed on updating their policies and procedures based on Florida law requirements,” Flagler County Sheriff Rick Staly told The Epoch Times Monday.

A Staly explained, the law cited by Woolbright in her complaint is “very specific.” In order to violate that law, and be considered “harmful to children,” the book would have to meet all three standards, as described in Florida Statute 847.001 (6):

“Harmful to minors” means any reproduction, imitation, characterization, description, exhibition, presentation, or representation, of whatever kind or form, depicting nudity, sexual conduct, or sexual excitement when it:

“Had the school board complied with the law, and we did this investigation and our investigators felt this was pornography, then the law says it would go to the state attorney’s office,” Staly said.

“So here we are with a policy that hasn’t been updated to include the obscenity chapter,” Woolbright told The Epoch Times. “Our policies are based on state statute, so this is negligence on the school board attorney. Evidently, she didn’t update that one correctly when the law was passed so she was negligent. So how can you hold any employees accountable for not following policy when your policy is incorrect? So that’s why the sheriff could not go forward with anything. He said, had our policy been appropriate he may have been able to go to the next level.”

“It’s really the school board’s and the attorney’s fault,” Woolbright said further. “It comes down to us. Even though I didn’t know about it until now, the accountability comes back to us. The good news is the people of this county now know what’s going on. They could have swept this under the rug had I not gone to the sheriff.”

“I have nothing but empathy and compassion for George Johnson,” Woolbright expressed during her closing statement at the Nov. 16 School Board meeting, folding her arms against herself as her quieted voice broke with emotion. “I wish that everything didn’t get so messed up and I could have a conversation with him, because we’re more alike than we are different. But the media ruined that. Didn’t they?”