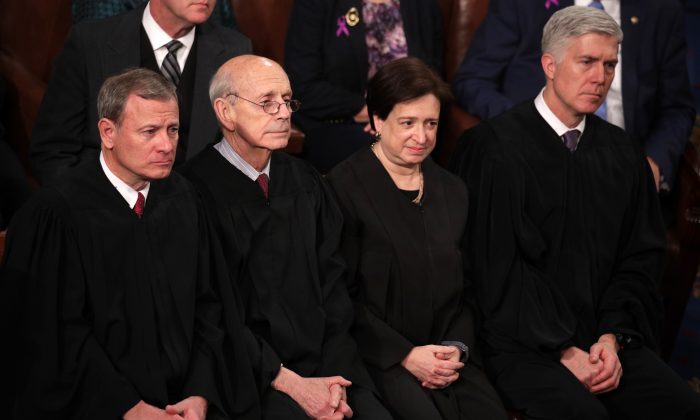 The Supreme Court declined on April 19 to hear a lawsuit regarding a Pennsylvania voting dispute nearly six months after the Nov. 3, 2020, election.

The court rejected an appeal from a Republican congressional candidate’s unsuccessful challenge of the state’s mail-in ballot initiatives, which is the final Nov. 3-related action to be dismissed related to Pennsylvania’s voting laws.

In a two-line order (pdf), the Supreme Court wrote: “The petition for a writ of certiorari is granted. The judgment is vacated, and the case is remanded to the United States Court of Appeals for the Third Circuit with instructions to dismiss the case as moot.”

The decision is the Supreme Court’s latest rejection of a slew of election lawsuits that came before and after the Nov. 3 election, as President Donald Trump and his Republican allies attempted to challenge the results.

The suit, which was filed by GOP congressional candidate Jim Bognet, concerned whether the Pennsylvania Supreme Court exceeded its authority by allowing greater access to early and mail-in voting in Pennsylvania, which, he argued, circumvented the state General Assembly’s authority. Four individual voters joined Bognet, who ultimately lost his congressional bid.

The Pennsylvania Supreme Court had ruled in 2020 that extended mail-ballots could come in until three days after Election Day.

Trump and other Republicans have said that President Joe Biden had unfairly benefited from relaxed mail-in balloting measures that were implemented due to the CCP virus pandemic.

Bognet’s case was initially dismissed by the 3rd U.S. Circuit Court of Appeals, saying that neither Bognet nor the other challengers had the legal right to bring the case.

“This case presents an opportunity for the court to resolve these issues in an orderly manner on full briefing and argument, rather than on the ‘shadow docket’ under the time pressures of an ongoing election,” David Thompson, a lawyer for Bognet, said in court documents.

Thompson then argued that the state Supreme Court “rewrote” election deadlines and said that the Constitution gives authority to “state legislatures” and not “state judges” to handle federal election laws.

“Although Election Day has passed, the disputes around these questions are not going away,” Thompson said. “This Court’s intervention is needed to resolve splits in the lower courts. Federal courts of appeals have reached directly contrary holdings for which parties have standing to bring claims under the Elections.”

Robert Wiygul, a lawyer for the Commonwealth of Pennsylvania, told the Supreme Court that they shouldn’t intervene in the case, adding that the Pennsylvania Supreme Court responded during the CCP virus pandemic and amid U.S. Postal Service delays.

“It is undisputed that the total number of ballots challenged by petitioners is less than the margin of victory in each of Pennsylvania’s federal races. Further, the vote totals certified by Pennsylvania do not include any of the ballots to which petitioners take exception,” he wrote (pdf).