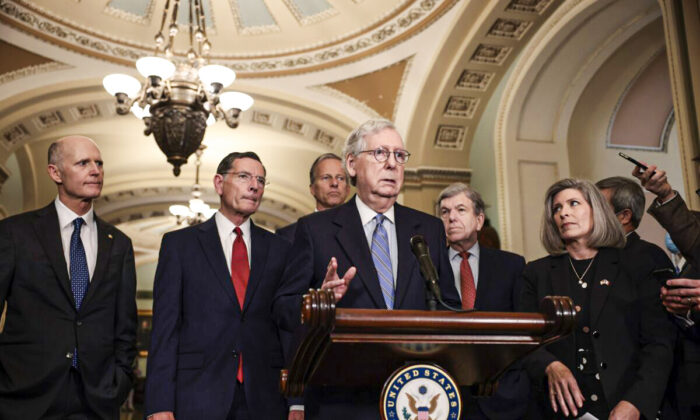 Senate Republicans on Nov. 3 filibustered an election bill put forward by Democrats, continuing a longstanding division between the two parties on voting-related legislation.

The mostly party-line vote saw only one defection, as Sen. Lisa Murkowski (R-Alaska) joined Democrats in support of the bill, and is now the only Republican lawmaker to lend support to any of Democrats’ election bills. Vice President Kamala Harris presided over the vote.

“After today’s vote, it’s clear that the modern Republican Party has turned its back on protecting voting rights,” Senate Majority Leader Chuck Schumer (D-N.Y.) said after the legislation failed to advance.

Schumer gave a grateful nod to Murkowski for supporting the bill, but asked, “Where is the rest of the party of Lincoln?”

The bill, called the John R. Lewis Voting Rights Advancement Act, was originally put forward in the House by Rep. Terri Sewell (D-Ala.). The same legislation was introduced to the Senate at the beginning of October by Sen. Patrick Leahy (D-Vt.).

In an August opinion piece published in the Montgomery Advertiser, Sewell argued that state-level voter integrity laws are putting the Voting Rights Act (VRA) of 1965 “in peril.” Sewell compared the “state-level effort to restrict the right to vote” to “modern-day Jim Crow attacks.”

Primarily, the bill is intended to restore provisions of the VRA that Sewell and other Democrats accuse the Supreme Court of “gutting.”

Several of the VRA’s enforcement mechanisms were struck down in 2013 after the high court ruled that circumstances had changed so dramatically in the 50-plus years since the bill’s passage that these “extraordinary” mechanisms could no longer be justified.

Under the VRA, states considered by the federal government to have a history of discrimination were barred from changing their election laws without federal “pre-clearance” approving the laws.

After the Supreme Court’s 2013 decision, several states rushed to strengthen their voting laws. The frenzy to further strengthen state election rules has only grown since, as Republicans prioritize securing elections in the wake of inconsistencies in the 2020 election.

Under the bill filibustered by Republicans, the federal pre-clearance requirement would return to full effect.

Democrats claim that many Republican-passed election laws are discriminatory, and are intended to target minorities. While the nation’s highest court rejected this argument in the 2021 case Brnovich v. Democratic National Committee (pdf), Democrats have continued to warn that a new Jim Crow era is right around the corner.

The John Lewis Voting Rights Act is one of many election bills put forward by Democrats.

Another proposed measure, called the “For the People” Act, would have radically changed elections and barred states from using many of the election security measures on which they currently rely. After key swing-voting moderate Sen. Joe Manchin (D-W.Va.) announced his opposition to the bill, Democrats scrapped it.

Since taking office, Republicans in the 117th Congress have opposed efforts by Democrats to federalize elections, and have used the filibuster in the past on other election bills.

That bill, created in a compromise effort led by Manchin, would have created new requirements for groups to disclose information about their donors, named Election Day a national holiday, and created federal standards for voting by mail, early voting, and voter ID.

Before the Oct. 20 vote, Sen. Dick Durbin (D-Ill.) asked Republicans to at least consider the motion and not to use the filibuster, which he called “the weapon of Jim Crow.”

The failure of this latest bill is likely to rekindle cries among Democrats to change or abolish the filibuster.

In an interview, Rep. Jim Clyburn (D-S.C.) said that election bills deal with “constitutional rights” and “should not be subjected to a filibuster.” Sen. Jeff Merkley (D-Ore.), who introduced the For the People Act, earlier this year warned in an interview with CBS that it would be “election Armageddon” if the rules about the filibuster aren’t changed. Sen. Amy Klobuchar (D-Minn.) voiced support for changing or removing the filibuster, saying that “at some point, you got to get things done.”

But others in the caucus, including Manchin, are opposed to this course.