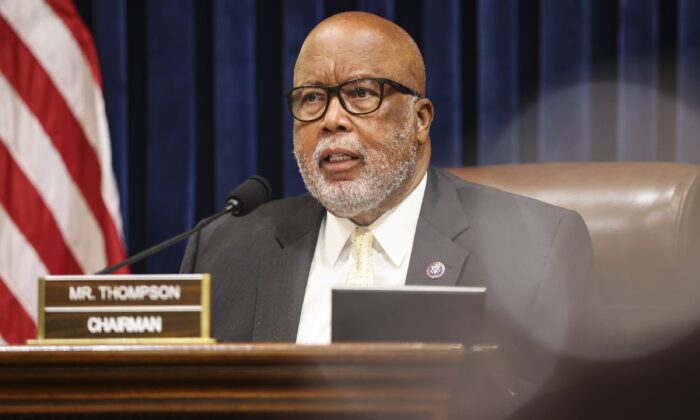 Rep. Bennie Thompson (D-Miss.), chairman of the House Select Committee investigating the Jan. 6 breach of the U.S. Capitol, during a panel hearing in Washington on July 27, 2021. (Oliver Contreras/Pool/Getty Images)
US News

A freelance photojournalist is suing the House Select Committee investigating the Jan. 6 breach of the U.S. Capitol, saying the panel issued “an invasive and sweeping subpoena” of her phone records that violates the First Amendment.

Amy Harris, a photographer who has worked with outlets including The Washington Post, The New York Times, and Time magazine, filed a lawsuit on Wednesday afternoon in federal court in Washington.

Her 23-page suit (pdf) seeks to block a subpoena issued by the Jan. 6 panel, arguing that demanding her phone records violates her right not to reveal confidential sources. The subpoena would compel her phone carrier, Verizon, to hand over her phone records dated from Nov. 1, 2020 through Jan. 31, 2021.

Harris had documented the Proud Boys and its leader, Henry “Enrique” Tarrio, in the days before the Jan. 6 breach and on the day itself.

The breach took place during a joint session of Congress when lawmakers met to certify electoral votes submitted by states. The Capitol grounds and building were breached by protesters and some rioters, some of whom wanted to voice their stance against then-Vice President Mike Pence’s refusal to intervene in the certification process. Thousands of peaceful protesters remained outside.

Protesters have said they believe widespread fraud occurred in the election and did not like how officials in some states dramatically altered voting rules amid the COVID-19 pandemic.

The photojournalist in her lawsuit argues that the panel’s subpoena violates “her First Amendment rights as a journalist, her protection under the D.C. Shield law, and her Fourth Amendment right against unlawful search and seizure.”

The House Select Committee’s subpoena would also “impermissibly intrude on her protected newsgathering activities, deprive her of future opportunities to obtain confidential information from confidential sources, and expose her to possible threats of bodily harm from those whose numbers would be so exposed by disclosure of her call detail records,” the complaint argues.

It also states that the subpoena is “overly broad with respect to time frame” and “contains no limitations seeking to preserve applicable privileges or prevent violations of Harris’s constitutional rights.”

“Demanding journalists’ telephone records that reveal confidential sources from third parties is tantamount to demanding the records from the journalists themselves,” Harris’s suit argues. “A journalist’s promise to maintain confidentiality would be meaningless if a source’s identity could be discovered” through such methods.

Harris’s lawsuit comes days after former President Donald Trump’s chief of staff Mark Meadows sued the House of Representatives panel, after they said they would move to hold in contempt of Congress for refusing to appear for a deposition at the request of the committee.

Meadows’s lawsuit, filed in a Washington, D.C. federal court, asks a judge to invalidate two subpoenas that he says are “overly broad and unduly burdensome.” It accuses the committee of overreaching by issuing a subpoena to Verizon for his cellphone records.

The House of Representatives voted 222–208 on Tuesday approving a resolution to hold Meadows in contempt, and recommended he face federal charges. It is now up to the Department of Justice to decide whether to prosecute the former White House chief of staff.