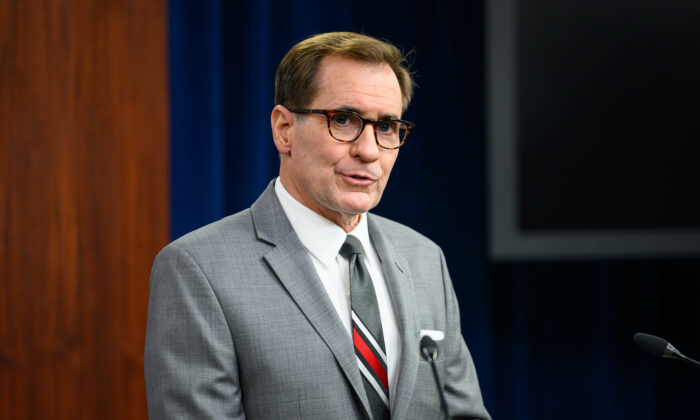 U.S. military service members will be allowed to seek an exemption from the soon-to-be-mandated COVID-19 vaccines, which would be determined by individual military service regulations, a Pentagon spokesperson said.

“There is a religious exemption possibility for any mandatory vaccine, and there’s a process that we go through to counsel the individual both from a medical and from a command perspective about using a religious exemption,” Pentagon press secretary John Kirby said during a press briefing on Aug. 10.

The department would make sure that every individual with reservations gets proper counseling on the COVID-19 vaccine’s safety and efficacy, Kirby said. Both a medical professional and a commander would counsel the individual about the risks of not being vaccinated and how that might affect deployability, assignments, travel, teammates, and the mission.

“We take freedom of religion and worship seriously in the military. It’s one of the things that we sign up to defend,” Kirby said. “And so it’s something that’s done very carefully.”

Service members also will be able to apply for medical exemptions, Kirby said.

“The primary care physician will be able to help make that determination,” he added.

A service member can’t request an exemption just because he or she doesn’t want to take the vaccine, Kirby said.

“You’ve got to go through a process to get that approved. Troops who have pre-existing medical conditions, or on the advice of their physician might not have to take the vaccine,” Kirby told Fox News on Aug. 10. “But if you’re just objecting because you’re objecting, once it’s become mandatory, that’s a lawful order, and our expectation is that you’re going to obey that order.”

“Nobody is looking for strong, punitive disciplinary measures here. Frankly, we believe that most troops will respond positively to the order, just like they do in every other mission-critical order that they’re issued. But there are tools available to commanders, short of disciplinary action, to try to get soldiers to do the right thing.”

Defense Secretary Lloyd Austin announced on Aug. 9 that the Department of Defense would require all active-duty military members to get a COVID-19 vaccine.

“I want you to know that I will seek the President’s approval to make the vaccines mandatory no later than mid-September, or immediately upon the U.S. Food and Drug Administration (FDA) licensure, whichever comes first,” Austin said in a memo sent to all Pentagon employees.

Currently, the three COVID-19 vaccines in the United States—Pfizer, Moderna, and Johnson & Johnson—are all being distributed under emergency use authorization.

Austin didn’t mention the possible exemptions, and a Pentagon spokesperson declined to answer at the time.

“I strongly support Secretary Austin’s message to the force today on the Department of Defense’s plan to add the COVID-19 vaccine to the list of required vaccinations for our service members not later than mid-September,” Biden said in a statement.

“These vaccines will save lives. Period. They are safe. They are effective. Over 350 million shots have been given in the United States alone.”

According to Pentagon, more than 73 percent of active-duty military members have received at least one shot of the vaccine to date.