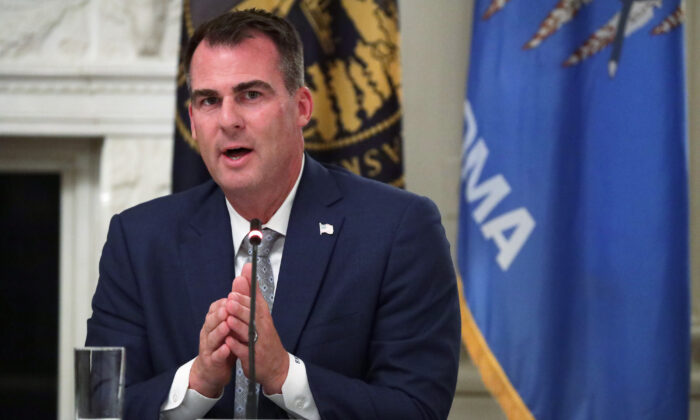 Oklahoma Gov. Kevin Stitt speaks at a roundtable at the White House on June 18, 2020. (Alex Wong/Getty Images)
US News

Oklahoma Gov. Kevin Stitt signed a bill on May 7 banning the teaching of critical race theory in the state’s public and charter schools.

Critical race theory is a quasi-Marxist ideology that holds that racism is ingrained in the United States. Among other concepts, it labels people with white skin, including children, as oppressors who hold an inherent advantage over other races and should feel guilt due to their “privilege.”

“Now more than ever, we need policies that bring us together, not rip us apart,” Stitt, a Republican, said in a video posted on Twitter. “I firmly believe that not one cent of taxpayer money should be used to define and divide young Oklahomans about their race or sex.”

The bill doesn’t mention critical race theory by name, and instead bans the teaching of some of the racist and sexist concepts promoted by the ideology, including that “one race or sex is inherently superior to another race or sex” or that “an individual, by virtue of his or her race or sex, is inherently racist, sexist or oppressive, whether consciously or unconsciously.”

The bill also prohibits teaching that “an individual should be discriminated against or receive adverse treatment solely or partly because of his or her race or sex” or that “members of one race or sex cannot and should not attempt to treat others without respect to race or sex.”

“Nothing in this bill prevents or discourages those conversations,” he said. “We can and should teach this history without labeling a young child as an oppressor, or requiring he or she feel guilt or shame based on their race or sex.”

Even though the new law directly prohibits the teaching of racist concepts, opponents of the measure called it “racist.”

“This past week, the Oklahoma State Legislature passed HB 1775, an outright racist and oppressive piece of legislation. As a mom, community member, and the Chair of the OKCPS Board of Education, I am appalled at the flagrant, attempt to erase factual, incomprehensible history that has occurred in the United States,” Paula Lewis, chair of the Oklahoma City Public Schools Board, wrote on Twitter.

“Our history as a country and as a state, if told accurately, is uncomfortable and should be heartbreaking for Americans that look like me, white,” Lewis wrote, reciting some of the more prominent critical race theory concepts.