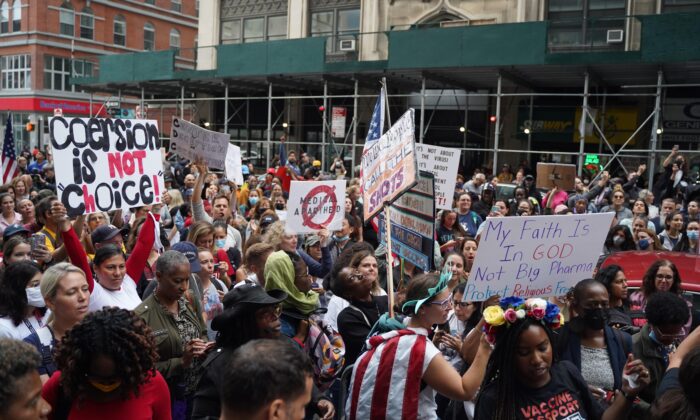 Teachers and others protesting against vaccination mandates in front of the Department of Education building in Brooklyn, New York City, on Oct. 4, 2021. (Petr Svab/The Epoch Times)
NY News

Aside from being put on unpaid leave, New York City teachers who’ve declined to get the COVID-19 vaccine won’t be allowed to keep their health benefits for another year unless they give up their right to sue the city over its vaccine mandate.

This condition was the result of an arbitration invoked by the city’s largest teachers union, the United Federation of Teachers (UFT). The union touted the arbitration verdict as a victory that forced the city to acknowledge medical and religious exemptions to the vaccination. It also allowed the teachers to take a year of unpaid leave with continued health care coverage or voluntarily resign with unused sick days paid out and a year of continued health insurance.

But the UFT Sept. 10 press release on the issue left out the caveat that the health benefits would only continue beyond Nov. 30 for those who sign waivers preventing them from suing the city for getting fired. It did include a link to the arbitration verdict that, on page 17, states the waiver requirement. But several teachers told The Epoch Times the DOE only explicitly told them about the condition about a week ago, right before the mandate went into effect.

An official with the city’s Department of Education (DOE) distanced the agency from imposing the waiver requirement.

“This stipulation was given out by a third-party arbitrator,” the official told The Epoch Times on the condition of anonymity. “Unions and DOE both agreed to it; DOE didn’t make this decision.”

It suggests that the conditions of the unpaid leave in particular were left to the parties to sort out.

“I concluded the parties are more familiar with Department [of Education] policy and how leave and entitlements have been administered in accordance with prior agreements,” the arbiter said.

The ruling says the affected employees have from Nov. 1 to 30 to extend their leave and the connected benefits.

“An employee must file a form created by the DOE which includes a waiver of the employee’s rights to challenge the employee’s voluntary resignation, including, but not limited to, through a contractual or statutory disciplinary process,” it says.

It’s not clear how hard the union pushed against the requirement. It hasn’t responded to a request for comment.

The issue underscores the dissatisfaction of the unvaccinated teachers with both the city and the union. They feel justified in holding back on the vaccine and believe the city has tossed them aside and the union failed to protect them, according to several conversations between them and The Epoch Times.

The vaccines, developed in record time and still in the process of clinical trials, are known to cause severe side effects such as myocarditis, particularly in young men, and blood clots, though authorities and experts say these are rare and pose a lower risk than the disease itself. The vaccines don’t necessarily prevent one from contracting and spreading COVID-19, but clinical trials indicate they minimize symptoms, which are primarily a concern for the elderly or those with preexisting conditions.