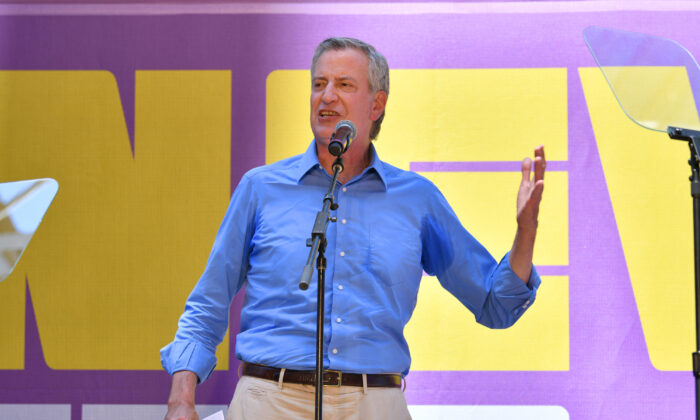 New York City Mayor Bill de Blasio has announced plans to cancel the “Gifted and Talented” accelerated learning program for schoolchildren, drawing praise from those who called the program discriminatory and condemnation from those who say the proposal would harm hardworking students.

Starting next fall, New York City will stop testing kindergartners for entry into the gifted and talented program, which was the subject of a lawsuit (pdf) that claimed the screening was “racially discriminatory” and fueled racial segregation in the school system.

The gifted program, which faced criticism for enrolling low numbers of black and Latino students, will instead be replaced with a new framework called Brilliant NYC that will leave students identified for accelerated instruction in mixed classrooms but provide them with “extra attention,” de Blasio said during an appearance on WNYC on Oct. 8 with schools Chancellor Meisha Porter.

Porter said that, under the new program, teachers would be provided with additional training to identify special abilities learners and provide them with “targeted individualized instruction.”

A parent calling into the WNYC program praised the move, saying the gifted program created a “two-tiered world that I think needs to go.”

Charleen Ang, a mother of a student enrolled in the gifted program on the Upper West Side, admonished de Blasio’s decision.

“It is abominable that de Blasio is, in his final months in office, dismantling one of the few successful education programs in New York City, adversely impacting a swath of children,” she told the New York Post.

De Blasio’s nearly eight-year tenure as mayor ends in less than three months. Democratic candidate Eric Adams, who is widely expected to replace de Blasio, has proposed a different framework, with Chalkbeat reporting that he plans to keep the admissions test and expand the number of gifted classrooms across the city.

Republican mayoral candidate Curtis Sliwa, who has vowed to fight to preserve the gifted and talented programs, criticized de Blasio’s decision to phase out the current arrangement, citing a range of benefits and arguing it “should not be diluted, nor should it be discontinued.”

The gifted program faced criticism for enrolling low numbers of black and Latino students. According to Chalkbeat, a news organization that specializes in public education coverage, more than 70 percent of spots in the gifted program go to Asian American and white students, who make up less than a third of New York City’s student population.

Some Democrats also took aim at de Blasio’s decision, with state Sen. John Liu, who chairs a panel on New York City schools, taking to Twitter to express his displeasure.

“Gifted and talented programs have been an integral option for generations of schoolkids,” Liu wrote in a tweet. “@BilldeBlasio promised intensive public engagement about it but now wants total elimination.”

Asked on the WNYC program about his message for parents who might choose to leave the New York City public school system or the city entirely if the gifted program is done away with, de Blasio said, “I bet you a lot of parents are now going to look at this plan and say, this is a reason to stay.”

The gifted program would be phased out, with kids entering it between now and next year allowed to continue in it until completion, he said.

Porter said that parents still have an opportunity to provide feedback on the proposal, which may still be tweaked, calling it a “blueprint for the plan that we intend to implement” and “our vision for New York City.”

Heather Higgins, chair of the Independent Women’s Network, said in a tweet: “Bill de Blasio’s latest plan to harm hardworking students and parents—ending NYC’s accelerated Gifted & Talented program—is only viewed as a good idea by the stupid, the jealous, and the vindictive.”