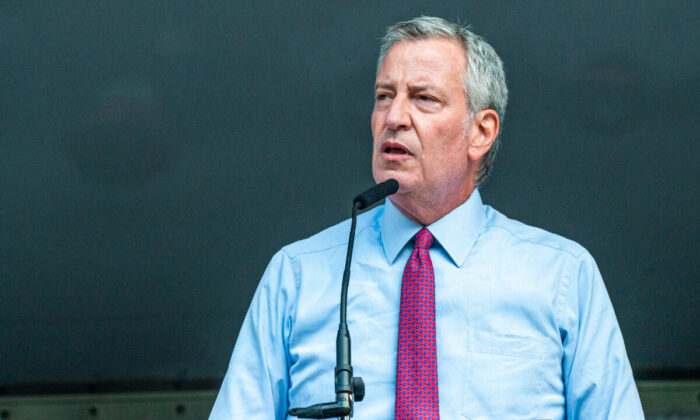 Private sector workers in New York City will have to get a COVID-19 vaccine or face termination, Mayor Bill de Blasio announced on Dec. 6.

“We have decided to use a preemptive strike to really do something bold to stop the further growth of COVID and the dangers it’s causing to all of us,” the mayor said.

De Blasio, a Democrat, made the announcement during an appearance on MSNBC’s “Morning Joe.”

The rationale behind the mandate is the Omicron virus variant, colder weather, and upcoming holiday gatherings, he said.

Employees can provide verification of vaccination to their employers by using a vaccine passport such as the New York State Excelsior Pass or by presenting the paper card provided at the time of vaccination.

The mandate deadline is Dec. 27.

More details, including guidance on accommodations, will be issued on Dec. 15.

Eric Adams, who is set to succeed the term-limited de Blasio next month, didn’t respond to a request for comment by press time.

Mandating vaccines for all workers will make it harder for them to avoid getting a jab, de Blasio said, as he urged other mayors, governors, and CEOs to impose mandates.

“The more universal they are, the more likely employees will say ‘OK it’s time, I’m going to do this.’ Because you can’t jump from one industry to another or one company to another; it’s something that needs to be universal to protect all of us,” he said.

In addition to the newly announced requirement, New York City will extend its vaccine mandate for indoor dining to children as young as 5 while amending it to force people to get two COVID-19 vaccine doses instead of one, except for people who get the single-shot Johnson & Johnson vaccine.

“How can he enforce this on businesses that operate without licenses from NYC?” he wrote on Twitter. “He can’t. Don’t open the door for the de Blasio health police. You don’t need a vax to work in most private sector jobs in New York City. The court will tell us this, too.”

New York City already had one of the strictest testing and vaccine regiments in the country. Many workers were already being forced to get vaccinated, including private and religious school employees, and even to enter most businesses requires people to show proof of vaccination.

The city is reporting a seven-day average of nearly 1,600 cases of COVID-19, the highest since Sept. 27 but well below the two largest waves of the pandemic.

Hospitalizations linked to COVID-19 are down as well, with a seven-day average of just 43.

The overwhelming majority of people who get COVID-19 show few or no symptoms.

Deaths are primarily among the elderly or otherwise infirm.

The effectiveness of the vaccines against CCP virus infection drops significantly over time, triggering a widespread push for booster shots. Some experts fear the vaccines won’t protect as well against the Omicron variant compared to other variants.

The Biden administration earlier this year announced a private employer vaccination mandate, but the Department of Labor’s Occupational Safety and Health Administration suspended enforcement of the rule last month after federal courts entered a preliminary injunction against it.

A similar mandate, focused on health care facilities, was also ruled against for now by the courts, prompting the administration to suspend it.

New York City’s measures have been challenged in court, but plaintiffs have failed to overturn any of them thus far. De Blasio said he was confident the private sector mandate would also prevail over any challenges.