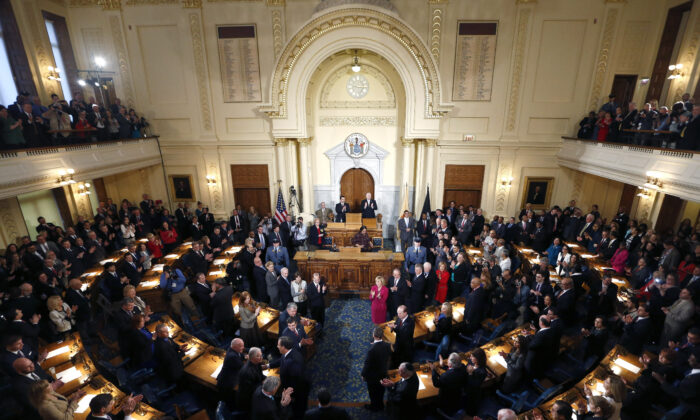 Former New Jersey Gov. Chris Christie arrives to deliver the State of the State Address in the Assembly Chambers at the Statehouse in Trenton, N.J., on Jan. 14, 2014. (Jeff Zelevansky/Getty Images)
Vaccines & Safety

A number of New Jersey Republican lawmakers defied a new policy to show proof of COVID-19 vaccination or negative test in order to enter the Assembly chamber in New Jersey Statehouse.

They were stopped by uniformed troopers for about 10 minutes before they eventually entered without showing any vaccination proof or a negative test, reported The Associated Press.

Hours later, a state appellate court ruled to put on hold the vaccination or test mandate order and to set up a potential hearing date for later this month thus handing a victory to Republicans who challenged the vaccination policy, according to The Associated Press.

The day before, Senate and Assembly GOP lawmakers filed a lawsuit at a state superior court to block enforcement of the policy that restricted access to New Jersey legislature based on COVID-19 vaccination status for both the public and legislators, according to a statement.

The measure was enacted in the form of a resolution at the end of October by the State Capitol management commission—comprising four legislative staff and four staff from the governor’s office—despite objections from Republicans.

The resolution required all persons who attend all gatherings and meetings in state capitol buildings to show either proof of full vaccination against COVID-19 or the negative result of a COVID-19 PCR test performed within the last 72 hours.

State Senate Republicans showed their vaccination or test proof when entering the Senate chamber despite objecting to the policy, according to New Jersey Globe.

New Jersey Senate Republican Leader Tom Kean said on Thursday in a statement that the resolution limits “public access to the State House in a manner that’s discriminatory and violates clear constitutional protections afforded to legislators when performing official duties on behalf of their constituents.”

Assembly Speaker Craig Coughlin, a Democrat, criticized Republican Assembly members, who defied the mandate, in his speech during the session on Thursday. He said that while New Jerseyans sacrificed due to various restrictions during the entire COVID-19 pandemic, “28 members of the minority caucus could not be bothered to exhibit the common decency and humanity all because they would rather have a couple of minutes on TV news or a point to stand for some political theater.”

New Jersey Assembly Republican Leader Elect John DiMaio responded to Coughlin’s criticism in a statement: “We were successful today fighting for the people of New Jersey. Standing up for the people is not political theater, it is our job. This evening the people were vindicated by a judge who stayed the policy.”

“Over the last year, there were sessions with just as many or more cases and just as high or higher transmission rates with no or fewer vaccinations. Everything went fine,” DiMaio said adding that his statement can be verified by checking the state COVID-19 database.

As a result of the incident, the voting session scheduled for that day was delayed for nearly three hours, according to New Jersey 101.5. Democratic lawmakers who hold a majority in the New Jersey legislature had been unwilling to enter the floor where the Republicans were, NJ 101.5 reported.

Coughlin requested the security to remove the Assembly members who did not comply with the policy to prove their COVID-19 vaccination status but the legislators did not move and remained in the chamber, reported the Globe.

The Speaker cut the Assembly voting session short on that day after only seven time-sensitive bills were voted postponing about 60 bills originally slated for voting during the session, according to NJ 101.5.

Coughlin said in a statement that ”a small group of radical Assembly Republicans chose to put showmanship for their own gain above the interests of the working people of our state.”

“Democrats came down to do the people’s business, complying with a reasonable common-sense policy that millions of New Jerseyans follow each and every day, and we addressed the most pressing legislative matters,” Coughlin added.

“The people who lost their livelihoods, and the children who didn’t go to school, and the sacrifices made by people across New Jersey and the country were exacerbated because of government mandates that went unchecked. Just like the mandate that we fought today,” the Republican leader elect said in the statement.