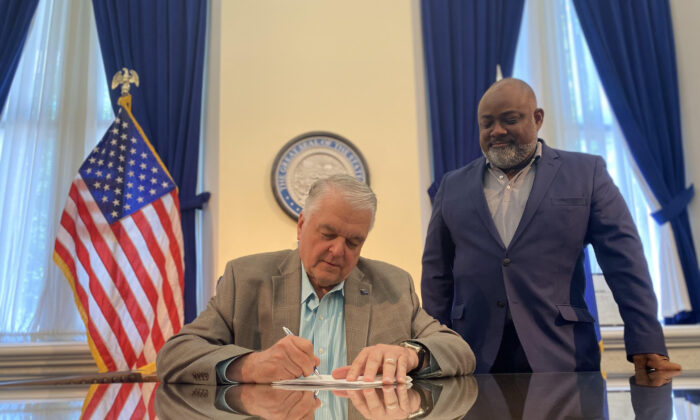 The bill, Assembly Bill 321, was passed along party lines in the state Assembly and Senate, both controlled by Democrats.

“At a time when state legislatures across the country are attempting to roll back access to the polls, I am so proud that Nevada continues to push forward with proven strategies that make voting more accessible and secure,” Sisolak, a Democrat, said in a statement emailed to The Epoch Times.

Sisolak also wrote on Twitter that with the law, Nevada has become the sixth state to adopt a “permanent vote-by mail-system.”

Colorado, Hawaii, Oregon, Utah, and Washington are the other five states that have existing permanent mail-in ballot systems. Voters in these states are automatically sent mail-in ballots. Other states have mail-in voting as an option only under emergency circumstances such as the COVID-19 pandemic.

Under the new law (pdf), every active registered voter will automatically receive a mail ballot for all elections unless the voter opts out by submitting a written notice.

It also allows the clerks to verify signatures of mail ballots manually or by electronic means, and to establish requirements for an electronic device to verify the signatures.

Under the law, if a voter doesn’t put his or her signature on the ballot or there’s a reasonable question of the signature matching, the voter is allowed to provide a signature or confirmation no later than 5 p.m. on the sixth day following an election—a day shorter than last year’s requirement in the general election.

The requirements for voter identity or address aren’t changed much. The law allows a first-time voter to vote by mail or at the polling place after registration with either photo identification or a copy of a “current utility bill, bank statement, paycheck, or document issued by a governmental entity, including a check which indicates the name and address of the person, but not including a voter registration card.”

Last August, when Sisolak signed a bill allowing statewide mail-in voting for the 2020 presidential election, former President Donald Trump criticized the move and threatened to sue him in court.

“In an illegal late night coup, Nevada’s clubhouse Governor made it impossible for Republicans to win the state,” Trump wrote on Twitter on Aug. 3. “Post Office could never handle the Traffic of Mail-In Votes without preparation. Using Covid to steal the state. See you in Court!”

Trump’s campaign filed a lawsuit in December, claiming that more than 42,000 people voted twice and about 20,000 were not Nevada residents.

A Nevada district court dismissed the case and the Nevada Supreme Court upheld the decision, saying Trump’s campaign didn’t prove allegations that there were errors in voting machines or that the contest was manipulated.