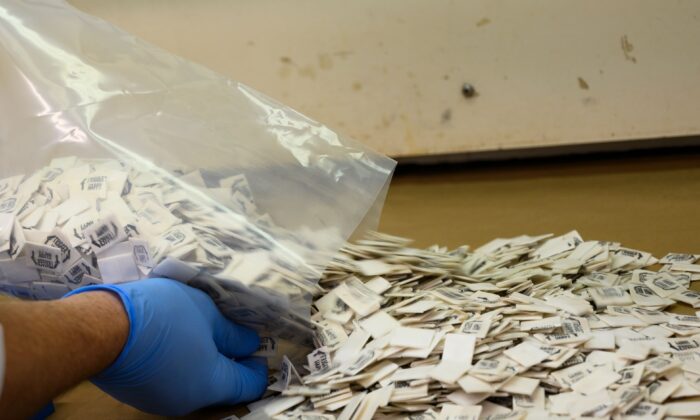 A Drug Enforcement Administration (DEA) chemist pours 2,500 packs of confirmed fentanyl onto a counter for testing at the DEA Northeast Regional Laboratory in New York on Oct. 8, 2019. (Don Emmert/AFP via Getty Images)
Crime and Incidents

More Than 100,000 Americans Died Due to Drug Overdose in 1-Year Period for the First Time, CDC Reports

More than 100,000 Americans have died of drug overdoses in the 12-month period ending in April, marking the highest number ever, the Centers for Disease Control and Prevention (CDC) reported on Nov. 18.

That’s a 28.5 percent increase over the previous year, with the total number of drug overdose deaths doubling over the past five-year recorded period.

Fentanyl was listed as the leading drug to cause overdose fatalities, according to the report. The category of synthetic opioids, which includes fentanyl, involved 64 percent of all overdose deaths.

President Joe Biden released a statement on Nov. 18 to address the rise in drug overdose cases among Americans.

“Today, new data reveal that our nation has reached a tragic milestone: More than 100,000 lives were lost to the overdose epidemic from April of last year to April of this year. As we continue to make strides to defeat the COVID-19 pandemic, we cannot overlook this epidemic of loss, which has touched families and communities across the country,” he said.

“As we grieve those we’ve lost and honor their memories, my administration is committed to doing everything in our power to address addiction and end the overdose epidemic.”

On Nov. 16, the director of the National Drug Control Policy also released a statement regarding recent participation to combat synthetic opioid trafficking from Mexico.

On Sept. 30, the Department of Justice announced seizures of historic amounts of deadly fentanyl-laced fake pills during a two-month period, including enough to kill “more than 700,000 Americans.”

“During the past eight weeks, DEA has targeted the criminal drug networks flooding the U.S. with deadly, fentanyl-laced fake pills,” DEA Administrator Anne Milgram said in the announcement.

“DEA remains steadfast in its commitment to reduce drug-related violence and overdose deaths by dismantling the violent, criminal drug distribution networks across the United States. The fentanyl-laced fake pills seized by DEA could potentially kill more than 700,000 Americans.

“I urge the American public today to talk to their loved ones about the threats and dangers of fake pills and the simple fact that one pill can kill.”