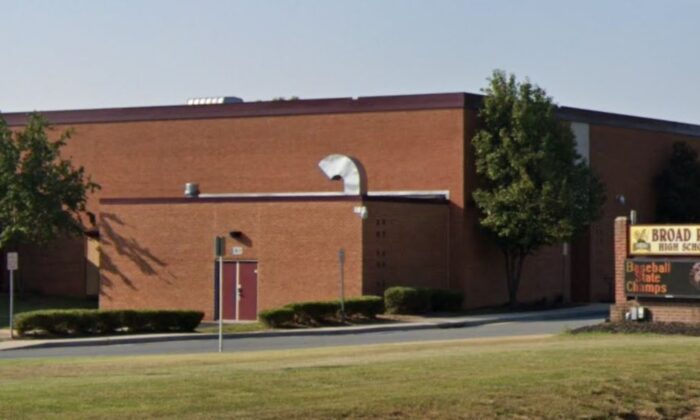 Broad Run High School is seen in Ashburn, Va., in a file image. (The Epoch Times via Google Maps)
Crime and Incidents

A teenager in one of Virginia’s most populous counties on Monday pleaded no contest to assaulting a girl in a school bathroom last month.

The same teen in October was found guilty of sexually assaulting a different girl at a different high school in Loudoun County in May.

The no contest plea means the boy did not challenge the charges, which were felony abduction and misdemeanor sexual battery. The 15-year-old admitted to abducting a girl from a hallway inside Broad Run High School in Ashburn and forcing her into an empty classroom, where he touched her chest area, authorities said.

The Epoch Times was told the hearing was closed to the press.

The boy, who has not been named publicly, was reportedly in ankle chains at the court hearing and will stay locked up until next month.

Pamela Brooks, the chief judge of the county’s Juvenile and Domestic Relations District Court, has combined the cases.

She will sentence the boy on Dec. 13.

The maximum sentence would see the boy land in prison until his 21st birthday, Loudoun County Commonwealth’s Attorney Buta Biberaj, a Democrat, told reporters Monday in a press briefing after the hearing.

“Is it appropriate? We have to wait for the information to make that determination,” she said.

Juvenile code gives the court “a very wide latitude” as far as the sentencing, according to Biberaj.

Prosecutors and the court will take into account the results of a social history, which will examine the boy’s background and the offenses he committed.

The main goals of the juvenile court system are safety and rehabilitation, the prosecutor said.

The first assault in May at Stone Bridge High School in Ashburn set off a series of events.

The father of the girl that was assaulted, Scott Smith, later went to a school hoping to speak out about what happened. Smith was arrested there for disorderly conduct. He was convicted but has argued the arrest was unwarranted and that he was told by a local activist that his daughter was lying about what happened.

During the hearing, Loudoun County Superintendent Scott Ziegler falsely said school officials had no records of assaults occurring in bathrooms. He later said he misunderstood the question and has refused to step down.

Parents have also pushed for the resignation of school board members, who were informed before the hearing of the May alleged assault but did not counter Ziegler’s false statement.

Virginia’s recently-elected attorney general, Jason Miyares, has vowed to investigate sexual assaults in the school system and Loudoun County hired an outside law firm to independently review how the assaults were handled.

It’s unclear why the boy was allowed to transfer to another school, where he abducted and assaulted the second girl. Biberaj’s office has not responded to requests for comment and asked for more time to fulfill a records request filed by The Epoch Times.