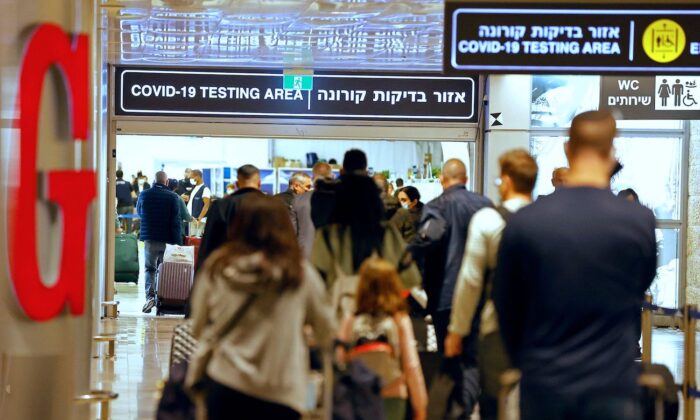 Passengers walk with their luggage upon their arrival at Ben Gurion Airport near Lod, Israel, on Nov. 1, 2021. (Jack Guez/AFP via Getty Images)
WORLD

Israel to Shut Borders to All Foreigners, Use Phone-Tracking Tech Over Omicron COVID-19 Variant

Israel on Saturday unveiled new plans to ban all foreigners into the country, a world-first in efforts to curb the spread of the newly detected COVID-19 variant called Omicron.

The nation has also revealed plans to use counter-terrorism phone-tracking technology to surveil the new variant’s spread.

The travel ban to all foreigners would last 14 days, Israeli Prime Minister Naftali Bennett said in a statement.

The new measures, which still require government approval, come after Israel announced a smaller-scale travel ban on Friday for foreigners coming from most African countries.

Officials hope that within the 14-day period, more information about how effective COVID-19 vaccines are against the new CCP (Chinese Communist Party) virus strain may emerge.

Omicron was first detected in southern Africa and has been dubbed a “variant of concern” by the World Health Organization. It has since also been detected in Belgium, Hong Kong, Italy, Germany, and the United Kingdom.

“Our working hypotheses are that the variant is already in nearly every country … and that the vaccine is effective, although we don’t yet know to what degree,” Interior Minister Ayelet Shaked told N12’s “Meet the Press.”

Israel will also require all its citizens—including those who have been COVID-19 vaccinated—to quarantine, Bennett said. The measure will be in effect the midnight between Sunday and Monday.

Meanwhile, the Israel Security Agency’s phone-tracking technology will be used to monitor carriers of the Omicron variant in efforts to curb transmission, Bennett said.

The technology was used occasionally since March 2020 and matched virus-positive people’s phone locations with other nearby mobile phones to deduce with whom they had come into contact.

Israel’s Supreme Court this year limited the scope of its use after civil rights groups mounted challenges over privacy concerns.

Israel has confirmed one Omicron case in traveler returning from Malawi, country in southeastern Africa. The Israeli Health ministry did not say whether the person had been vaccinated.

There are another seven suspected Israeli cases, three of whom were fully vaccinated, and another three who had not recently traveled abroad, the country’s health ministry said on Saturday.

Israel is currently tracing some 800 travelers who returned recently from southern African countries.

Many countries have imposed restrictions on a slew of southern African countries upon news of the new variant and its potentially higher transmissibility. Countries include Australia, Brazil, Canada, the European Union, Iran, Japan, Thailand and the United States.

South Africa’s health minister has called such measures “unjustified,” while the chair of the South African Medical Association, Dr. Angelique Coetzee, who has been treating COVID-19 cases in Pretoria, South Africa, has told various media outlets that, so far, her patients’ symptoms have been “mild.”

“It may be it’s highly transmissible, but so far the cases we are seeing are extremely mild,” she told The Guardian. “Maybe two weeks from now, I will have a different opinion, but this is what we are seeing.

“So are we seriously worried? No. We are concerned and we watch what’s happening, but for now we’re saying, ‘OK: there’s a whole hype out there. [We’re] not sure why.'”