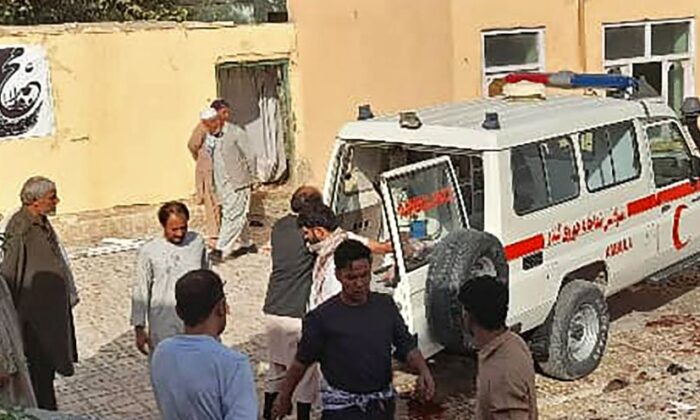 Afghan men stand next to an ambulance after a bomb attack at a mosque in Kunduz, Afghanistan, on Oct. 8, 2021. (AFP via Getty Images)
Afghanistan

ISIS Claims Responsibility for Terrorist Bombing That Killed 46 in Afghanistan

An ISIS terrorist affiliate claimed responsibility for a suicide bomb attack that killed dozens inside an Afghan mosque on Friday.

ISIS-K, the Afghanistan branch of the Syria- and Iraq-terror organization, said one of its members was behind the blast via its Amaq news channel. The individual who was behind the attack was a Uyghur Muslim, the group said.

The blast tore through a crowded mosque in the city of Kunduz during Friday noon prayers, the highlight of the Muslim religious week. It was the latest in a series of ISIS  bombings and shootings that have targeted Afghanistan’s new Taliban rulers.

Kunduz provincial spokesman Matiullah Rohani told news outlets that at least 46 people died in the blast, adding that more than 100 more were injured.

Meanwhile, main Taliban spokesman Zabihullah Mujahid said that “several of our compatriots,” likely referring to Taliban members, were killed and injured in the attack. And the Taliban “strongly condemns this heinous act and promises to find and punish the perpetrators of this heinous crime,” he added on Twitter.

The attack, according to the U.N. mission in Afghanistan, is “part of a disturbing pattern of violence” and represents the third “deadly attack this week apparently targeting a religious institution.”

“The U.N. family in Afghanistan is deeply concerned by reports of very high casualties in an attack today in Sayyidabad Shia Mosque,” it said. “Initial information indicates more than 100 people killed and injured in a suicide blast inside the mosque.”

In recent days, the Taliban—itself a designated terrorist group by several U.S. intelligence agencies—said it has conducted operations against ISIS-K in Afghanistan, killing several of the group’s fighters.

After the Taliban took over the country, Pentagon officials acknowledged that potentially thousands of ISIS members were released from prisons in August. And this week, a Republican lawmaker stated that a terrorist who carried out a bombing in Kabul in late August was released by the Taliban just days earlier.

“U.S. national security officials have now confirmed to me the reports that the Aug. 26 Kabul bomber was a known ISIS-K terrorist that was previously detained at the Bagram prison and was released along with thousands of others just days before the deadly attack,” Rep. Ken Calvert (R-Calif.) said in a statement this week.