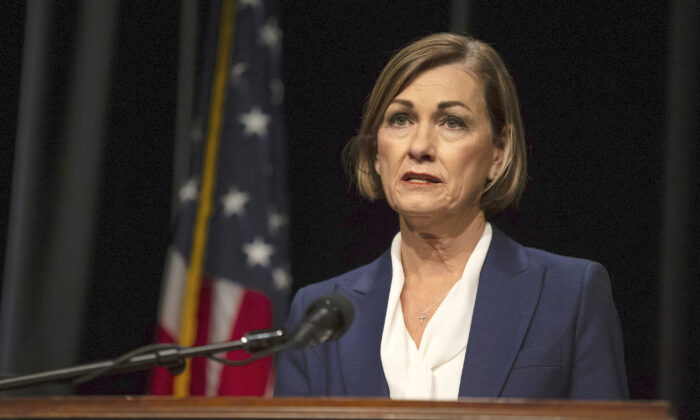 Iowa Gov. Kim Reynolds signed a bill into law on Tuesday that bans ballot harvesting in the Hawkeye State.

The bill, SF 568—which makes some amendments to an election reform law signed by Reynolds in March—passed along party lines both in the House and the Senate in May.

Reynolds didn’t make any comments when signing the law. However, she said, “It’s our duty and responsibility to protect the integrity of every election” when she signed the election reform law in March.

The most notable part of the new law is the strict limit on who can assist voters in delivering ballots, which effectively bans ballot harvesting.

The law requires that only someone living in the same home or an immediate family of a registered voter can deliver the completed absentee ballot for the voter.

According to the text of the bill, a blind or disabled voter can designate a “delivery agent” to help deliver the ballot. Still, the voter needs to finish a designation form, and the agent needs to provide a receipt when collecting the ballot. A voter’s employer or employer’s agent, or an agent of a voter’s union, a political party, a candidate or committee, can not act as his or her delivery agent.

A delivery agent can only help with no more than two voters in an election.

“I just think we’re trying to fix a problem we don’t have here in the state of Iowa. I’ve not seen any voter fraud,” Democrat Representative John Forbes said during the House session last month.

“We’re innocent people in the state of Iowa. They’re trying to do the right thing to help their fellow neighbor to just do the most American thing we can do, and that is vote. And these people you [are] putting at risk of maybe some type of criminal prosecution.” Forbes added.

Forbes, who also works as a pharmacist, said his employees might commit a felony by just helping people deliver the ballot to a mailbox.

Bobby Kaufmann, a Republican Representative, responded that Forbes should tell his employees not to handle ballots, and his employees would not be charged with a felony for making a mistake.

“You have to prove someone willfully did it,” Kaufmann said.

Republican Sen. Roby Smith, one of the bill’s authors, said that under previous laws, anybody could walk up and grab the ballot, “You don’t know who it is and they can open it up, they can change the vote, they can throw it away, they can shred it,” he said, according to ABC News.