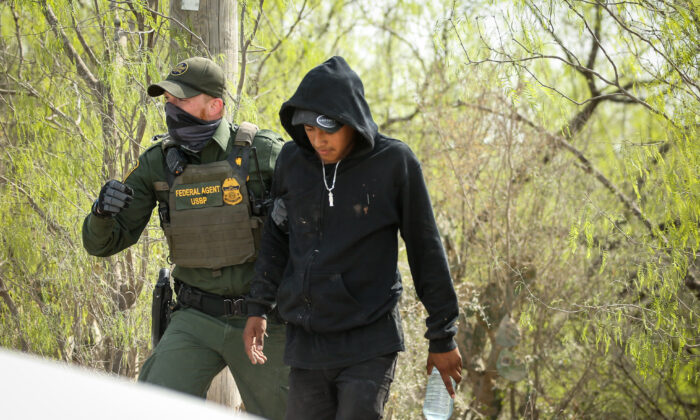 The March total edges out the highest month in 2019, during the most recent border crisis. In May 2019, Border Patrol apprehended 144,000 people between ports of entry.

“The border is wide open. … It’s not secure. Drugs are pouring in, and criminal aliens are pouring in right now,” Morgan said during a press conference along the Rio Grande on March 30.

In his first press conference since taking office, President Joe Biden on March 25 said his focus is to “rebuild the system that can accommodate the—what is happening today.”

The administration has opened several holding facilities for illegal immigrants, particularly to accommodate the increase in children crossing alone. The San Diego Convention Center is currently holding 500 children, while another 500 were sent to a site at the Fort Bliss military base in Texas on March 30.

In total, more than 12,000 children are being held by CBP and Health and Human Services.

When asked about the spike in illegal crossings, Biden said: “I’d like to think it’s because I’m a nice guy, but it’s not. It’s because of what’s happened every year.”

However, Morgan said the current surge can’t be explained away as a normal seasonal uptick.

“They created this crisis, and they’re trying to spin and blame everybody but themselves,” Morgan said. “The only thing that’s really been put out there that’s honest is that we’re going to see numbers that we haven’t seen in over 20 years.”

In a media call on March 26, a senior Border Patrol official said that 85 percent of the 2,200 individuals within family units who were apprehended the day prior were released into the United States. The official said that if a parent brings a child under the age of 7, they are automatically released into the interior rather than being expelled under the Title 42 health emergency provision.

Morgan said CBP had provided “exhaustive briefings” to Biden’s transition team to warn them of an “unmitigated crisis” if Biden ended the Migrant Protection Protocol program and the Asylum Cooperative Agreements with the Northern Triangle countries of Guatemala, Honduras, and El Salvador.