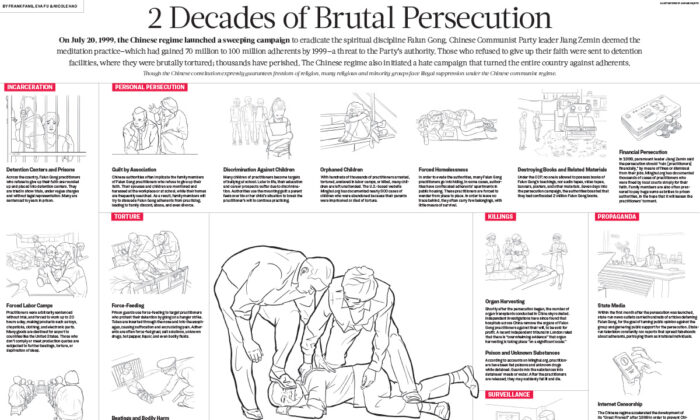 On July 20, 1999, the Chinese regime launched a sweeping campaign to eradicate the spiritual discipline, Falun Gong.

Then-Chinese Communist Party leader Jiang Zemin deemed the meditation practice—which had 70 million to 100 million adherents by 1999—a threat to the Party’s authority.

Those who refused to give up their faith were sent to detention facilities, where they were brutally tortured; thousands have perished.

The Chinese regime also initiated a propaganda campaign to vilify the adherents and spread hatred against the practice.

What is Falun Gong?

Falun Gong, a spiritual discipline rooted with gentle, slow-moving exercises, and moral values based on truthfulness, compassion, and tolerance, was first introduced in China in 1992.

The meditation practice was embraced by people from all walks of life. Chinese authorities initially exalted the practice for its benefits to citizens’ physical and mental health. The founder of the practice, Li Hongzhi, received a number of government awards for his contributions to society.

But then-Party leader Jiang Zemin saw Falun Gong’s enormous popularity as a threat to the regime’s atheist ideology and led him to fear losing absolute control, observers said. By 1999, the number of adherents had exceeded the Party’s total membership, with top officials and their family members counted among them.

In July 1999, Jiang launched a nationwide campaign to suppress Falun Gong, mobilizing the entire country’s security apparatus to locate and detain practitioners, despite objections from within the Party. Jiang established an extralegal, Gestapo-like secret police force called the 610 Office, expressly to carry out the persecution.